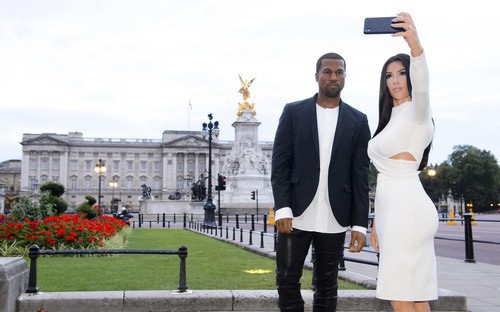 Madame Tussauds have added Kanye West to their waxwork collection.

Madame Tussauds have added Kanye West to their waxwork collection.

Kim Kardashian's wax figure, previously appeared in museum, together with her immortalized husband had a trip around London visiting the main attractions. Tourists could see Kim and Kanya together taking selfies at the busiest places of a city.

The photos of a star couple were made at such famous hotspots as Big Ben, the London Eye, Tower Bridge and Buckingham Palace. Afterwards, the museum has released a a special edition of a holiday album which included the photos of celebrities.

Passing pedestrians couldn't believe theur eyes: Kanye and Kim's figures looked so real that some people thought it should be a filming for a movie or a show.

Kanye West's figure was added few days ago and will be installed together with his wife in the permanent exhibition taking place in the main building of a museum.