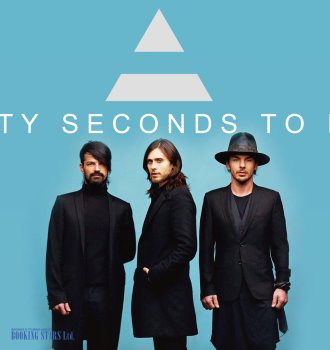 The band Thirty Seconds To Mars was established in 1998 in Los Angeles, California. The group is mostly famous for such songs as “From Yesterday”, “Kings and Queens”, and “This Is War”. The band holds a variety of awards, including several MTV Video Music Awards. The current lineup includes Jared Leto, Shannon Leto, and Tomo Milicevic.

The band Thirty Seconds to Mars or 30 Seconds To Mars was formed by a famous actor Jared Leto and his older brother Shannon. Later, they were joined by Solon Bixter, Matt Wachter, who then left the band. Even though Jared Leto is a famous Hollywood actor, he tried not to use his fame in order to promote the group. He even refused to perform live.

In 2001, 30 Seconds To Mars signed a deal with a producer Bob Ezrin and recorded their first studio album Welcome to the Universe. The Leto brothers played almost all the instruments. The LP sold over 100,000 copies in the USA. The singles from that album “Capricorn” and “Edge of the Earth” were not very successful.

In 2005, the band released the second album A Beautiful Lie. The LP was much more successful than the predecessor. It reached the 36th spot on Billboard 200 and 38th spot on the UK Albums Chart. The LP sold over 4 million copies worldwide. The singles “The Kill” and “From Yesterday” were a big hit in the USA, UK, Australia, and many other countries. In 2006, the band received an MTV Video Music Award for the music video to “The Kill”. The LP was citified platinum by RIAA in 2006.

In 2009, the band released their third studio album This is War. It was just as successful as the previous LP, reaching high spots on a variety of charts all over the world. The album sold 4 million copies worldwide and 500,000 in the US. The single “Closer to the Edge” was certified platinum in several countries.

In 2013, the band released their most successful album Love, Lust, Faith and Dreams. It reached the 6th spot on Billboard 200 and 5th spot on the UK Singles Chart. The band is currently working on a new album.