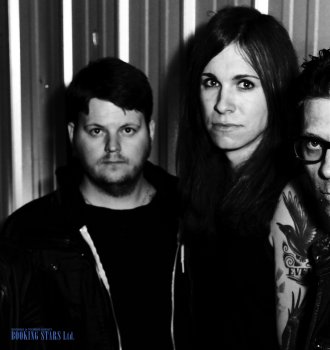 The band Against Me! was formed in 1997 in Florida, USA. The current lineup includes Laura Jane Grace and James Bowman. They are mostly famous for such songs as “I Was A Teenage Anarchist”, “Thrash Unreal”, and “Stop!” The band plays various music including folk punk and punk rock.

When Tom Gabel (who later underwent a sex change and became Laura Jane Grace) turned 16, he decided to form his own band. The name came from their debut demo album “Against Me!”.(1997) The next demo record was called “Vivida Vis!”(1998). The band released 500 copies of the album. It became popular thanks to the song called “Shit Stroll”. The band released three more demo albums.

In 2002, the band released their debut studio album Reinventing Axl Rose. The LP was recorded in No Idea Records studio. The album wasn’t as popular as the band members hoped for and didn’t manage to get into the charts.

In 2003, the band released a new album As The Eternal Cowboy, which they recorded in Fat Wreck Chords studio. Compared to the previous LP, this album became very popular among the heavy music fans. Some of the songs from that album made it into the charts. The LP itself reached the 36th spot on Billboard Indie Chart.

In 2006, Against Me! Released their first live album Americans Abroad!!! Against Me!!! Live in London!!!. All the songs on the LP were recorded live without any additional special effects. The album reached the 41st spot on Billboard Indie Chart and 38th spot on Top Heatseekers.

In 2007, the band signed a deal with Sire Records and released their next album New Wave. The LP became a big hit compared to their previous work. It finally entered Billboard 200, reaching the 57th spot and the 21st spot on the US Top Rock Albums Chart.

In 2010, Against Me! recorded a new album White Crosses. It was even more popular than the predecessors, reaching the 9th spot on the US Top Rock Albums Chart and the 7th spot on US Alternative Albums Chart. It also got to the 34th spot on Billboard 200.

In 2014, the band released their most successful LP so far Transgender Dysphoria Blues. It reached the second spot on Billboard Indie Chart and fifth spot on US Alternative Albums Chart.

Against Me! continue to write new music and perform live.

Cost to book Against Me!:
Price inquiry
Against Me! booking agent:
Contact agent
Contacts:
Send Against Me! a message
« previous next »