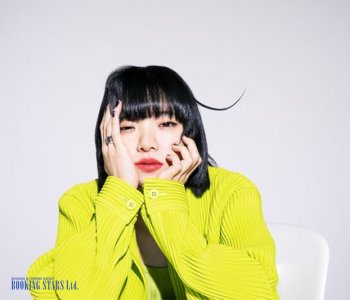 Aimyon - (Aimyon, born on March 6, 1995 in Nishinomiya, Hyōgo Prefecture, Japan) is a Japanese singer-songwriter under LASTRUM Music Entertainment Inc. and debuted in 2015.

She grew up touching music since her childhood due to her grandmother who had been dreaming of being a singer or her father who is working on acoustic songs and started songwriting since she was a junior high school student.
In March 2015, she released her indie debut with Tower Records' limited single "Anata kaibou junai uta ~shine~" and entered Oricon Indie Chart Top 10.
In May, the 1st mini album "tamago" has been released nationwide. Her 2nd mini album "Nikumarekko yo ni habakaru" has been released in December.

On November 30, 2016, she madee her major debut on Warner Music Japan's label "unBORDE" with the single "Ikiteirutan da yo na".
Then "Hyouhaku" was selected as a theme song and released in February 2017. The singles "Ai wo tsutaetaida toka" and "Kimi wa rokku o kikanai" have been released after that.
In September 2017 she released his first full album "Seishun no excitement".

On April 25th 2018, 4th single "Mangetsu no yoru nara" was released. "AIMYON TOUR 2018 - TELEPHONE LOBSTER-" was held in 8 locations nationwide and at she had her first overseas live at Taipei Legacy which was sold out.
On August 8th 2018 single "Marigold" released. From November the largest nationwide tour "AIMYON TOUR 2018 -HONEY LADY BABY-" was held.
In November 14th 2017 she released the 6th single "Konya kono mama" (theme song of Japanese TV drama).