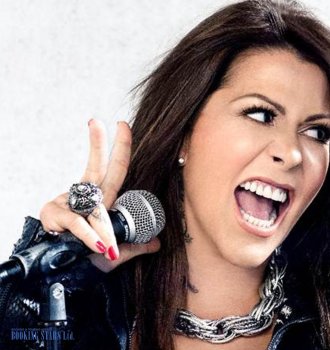 Alejandra Guzman was born on February 9, 1968, in Mexico City in the family of singer Enrique Guzman and actress Silvia Pinal. Since childhood, Alejandra traveled a lot with her mother and saw the TV backstage since her parents hosted Silvia y Enrique show. Being a teenager Alejandra took part in a musical Mame and decided to be a singer. After school, while trying to find the right direction in the music business, Alejandra starred in soap operas.

In 1989, her career took off with LP Bye Mama. The album was produced with the help of Miguel Blasco. After the release, her fans called her “The Queen of Rock”. The second LP Dame Tu Amor consisted of classical rock composition cover versions. Alejandra was famous for provocative behavior at her concerts, which was considered outrageous even by Latin American pop standards. Her best-selling LP was Eternamente Bella. It sold more than 1 million copies.

Guzman’s career suffered a downfall when she enrolled in a rehabilitation program to combat drug addiction. She checked out of rehab in 1997. During that period, she recorded an LP featuring the Middle East and Indian rhythms. Algo Natural was popular in North America.

In 1998, Alejandra married Farrell Goodman. But her marriage ended quickly due Farrell’s arrest in Germany. He was charged with drug dealing.  The singer assured that she didn’t know anything about it. To make things worse, somebody unsuccessfully tried to kidnap her daughter.

Alejandra attempted to return her glory and took part in the musical Gypsy with her mother. But critics didn’t support her role and the new LP.

Even after a series of scandals, the singer didn’t lose hope. In 2004, she released her new LP Lipstick featuring her first song in English. Despite bad sales, it was nominated for a Grammy Award twice. The LP Indeleble (2006) together with the single “Volver a Mar”  brought Alejandra back to the charts.  Shortly a new shock came. Guzman was diagnosed cancer.  Having won the battle with breast cancer, Alejandra recorded the single “Till The End”, which became gold and platinum.

In the following years, Guzman released several albums, gave many concerts and took part in TV shows. Clubs tried hard to book Alejandra for their events.

In 2017, together with her friend, singer Gloria Trevi, Alejandra organized a common project Versus Tour. They toured 30 American cities and released the same name album upon completion.