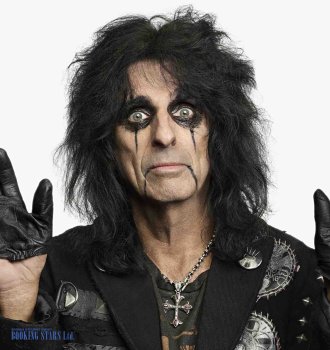 Alice Cooper is the founding father of shock rock. He reached the peak of popularity in the 1970s, shocking his fans with unusual, impressive, and often scary performances.

Cooper enjoyed music since childhood. In high school, the future celebrity created his first band. In the 1960s, the group caught the attention of a famous musician and composer Frank Zappa. In the 1970s, the band released several successful albums. In 1974, Cooper began a solo career, which quickly reached impressive heights and brought the artist popularity all over the world.

Alice Cooper was born on February 4, 1949, in Detroit. His real name is Vincent Damon Furnier. Vincent’s father was an Evangelist. When the boy was 12, his family first moved to California and then to Arizona. In Arizona, Vincent formed a band. At first, he called it Earwigs. Then the name was changed to Spiders. The band performed covers for hits of such bands as Beatles, Rolling Stones, and Cooper’s favorite – The Who.

After acquiring experience by performing in local nightclubs, Spiders decided to move to Los Angeles. By that time, the band had already developed a dark and gloomy sound, which brought it numerous negative reviews from music critics. However, Cooper wasn’t about to give up. His unusual approach appealed to Frank Zappa, who helped the aspiring artist sign a contract with a label.

In 1960, Spiders changed the name to Alice Cooper. Rumors have it that the name came from Cooper’s séances, in which a sorcerer with that name spoke to the artist. The same year, the band released a debut LP, Pretties for You. The second album, Easy Action, came out a year later.

Alice Cooper immediately earned an impressive reputation thanks to its rough and scandalous performances. During one of the concerts, a fan threw a live chicken to the stage. Cooper flung the bird back at the fans, who supposedly ripped it apart. According to another version, Cooper killed the bird himself and drank its blood.

Theatrics at concerts didn’t end with chickens. While on stage, Cooper “murdered” dolls by cutting their heads off and using electric chairs. Alice was drawing energy from the reaction of his audience, who appreciated the effort. Many fans were trying hard to book Alice Cooper for private events to enjoy his out-of-whack performances.

In 1971, Alice Cooper’s band signed a contract with Warner Bros. With the label’s support, the group released such albums as Killer (1972), School's Out (1972), Billion Dollar Babies (1973), and Muscle of Love (1974). All of them were successful, earning gold and platinum certifications in the USA.

In 1974, Cooper decided to leave the band. He took the name with him and used it as a pseudonym. Next year, the talented musician recorded his debut solo album, Welcome to My Nightmare. The LP became very popular in the USA and earned positive reviews from the critics. The next LP, Alice Cooper Goes to Hell, came out in 1976 and received gold status from RIAA.

While on the peak of his popularity, Alice Cooper was going through tough times. He was admitted into rehab. Eventually, the artist managed to battle his addiction and come back to the world of music. However, his next albums, Special Forces (1981) and Zipper Catches Skin (1982), weren’t as successful as the previous work. The latter didn’t even make it to the charts.

Cooper didn’t give up and worked hard on the next LP. Constrictor came out in 1986 and climbed into British and American charts. The next 11 albums recorded by Cooper between 1986 and 2017 also found their place on the charts.

Cooper is a talented artist, who managed to achieve success in many industries. As an actor, he appeared in such movies as Wayne’s World (1992) and Tim Burton’s Dark Shadows (2012).

In 2004, Cooper launched a highly successful radio show “Nights with Alice Cooper”. During the show, Alice talked about his life and arranged interviews with famous rock artists. The show is still airing in the USA, the UK, and Ireland.

In 2011, Alice Cooper’s band was inducted into the Rock and Roll Hall of Fame.

Cooper continues to give concerts and record new hits. In 2017, he released the latest album to date, Paranormal. To record the LP, Cooper worked with ex-members of his band and other famous musicians like Billy Gibbons from ZZ Top and Roget Glover from Deep Purple.

Cooper’s impressive talent caught the attention of NBC. The channel invited the artist to participate in the rock opera Jesus Christ Superstar in 2018. Alice portrayed King Herod alongside such celebrities as John Legend and Sara Bareilles.