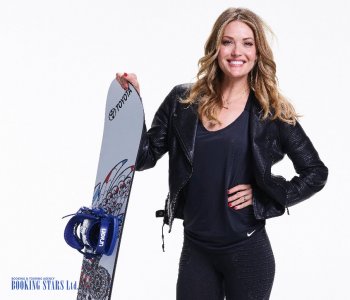 Amy Purdy has been at the forefront of adaptive snowboarding since having both legs amputated in 1999 after surviving bacterial meningitis. Determined to beat the odds and continue her passion, she was riding again well before professional advice ever suggested and it did not take long for Purdy to become a force not only on the course, but behind the scenes as well.

At her second Paralympic Winter Games, Purdy reached the both podiums including a silver in snowboard-cross. She raced at the 2017 World Championships in Big White, Canada, after returning from injury. She captured bronze in banked slalom and consistently reached the podium at three more competitions afterward.

Although the women’s SB-LL1 class has seen the rise of her compatriot Brenna Huckaby, a focused, healthy Purdy can still be a force to be reckoned with ahead of PyeongChang 2018.

After founding Adaptive Action Sports with her husband Daniel Gale, Purdy has pushed the boundaries of her sport in the USA and abroad, helping others find and love the sport so central to her life. She was instrumental in getting Para snowboard to be included at the Sochi 2014 Paralympic Winter Games, where she finished third in snowboard-cross.

Purdy’s career since then took off exponentially not only in the sport.

In the 2014-15 season, Purdy did not compete, choosing to focus on motivational speaking, writing and starting a new clothing line after a wildly successful appearance on the US television show “Dancing with the Stars.”

While her career outside snowboarding began thriving, she still missed competition and high-level training, and sought to balance her athletic and non-athletic career.

She was held back for much of the 2015-16 season to an injury and did not competed on the international scene since the US Nationals in March 2016 where she won in snowboard-cross.