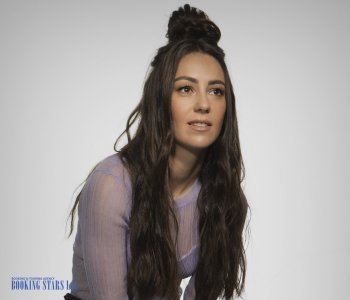 Australian singer/songwriter Amy Shark achieved massive breakthrough success in the late 2010s for her angsty, atmospheric indie pop. After her 2017 EP earned a half-dozen Aria Award nominations, she leapt to the top of the charts a year later with her platinum-selling full-length, Love Monster, which won, among other awards, Album of the Year at the Arias. A bevy of popular singles carried her into the next decade as she prepped her 2021 follow-up album.

Born Amy Billings in Gold Coast, Amy Shark is actually her second stage name. After quietly making music for several years as Amy Cushway, she entered a song in the Queensland Music Awards and ended up winning the pop category. She then began touring nationally and received an arts grant that allowed her to work with producer M-Phazes on her song "Adore." The single was well-received on radio upon release in 2016 and became a Top Three hit in Australia in early 2017. Shark signed with Sony Australia's Wonderlick label, and her official debut EP, Night Thinker, entered the country's albums chart at number two a few months later. The album garnered six Aria Award nominations and took home two, including Best Pop Release and Breakthrough Artist. Released in July 2018, Shark's first full-length effort, Love Monster, was a massive success, topping the pop charts and going platinum. It also won her three more Aria Awards including Album of the Year and Best Female Artist. She toured throughout much of the following year and appeared on the Chainsmokers' 2019 single "The Reaper" before heading back into the studio to record her follow-up. Throughout 2020 and into the next year she issued singles like "Everybody Rise" and "C'Mon," featuring Travis Barker, in advance of her sophomore album, Cry Forever.