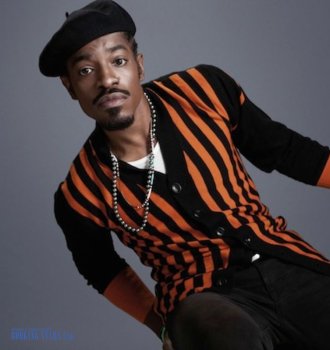 Andre 3000’s real name is André Lauren Benjamin. He was born on 26 May 1975 in Atlanta, Georgia. Andre was the only child in the family. He was raised by a single mother, who died in 2013. His dad, Lawrence Harvey Walker, followed in 2014. The aspiring artist graduated from high school but made a decision not to get a higher education.

Andre loved music since childhood. While still in school, he met Antwan "Big Boi" Patton. Together they formed a band called OutKast. The group stayed together from 1994 until 2006. They recorded six successful LPs. In 2007, the artists decided to take a break to pursue a solo career. There were rumors about their reunion in 2014. However, they only got together to perform at Coachella Valley Music and Arts Festival.

In 2004, together with Kelis, Andre recorded a single “Millionaire”, which was featured in the former’s LP Tasty. The song became an international hit, showing up on the charts in Belgium, Australia, New Zealand, the UK, Ireland, and Switzerland.

In 2007, after OutKast’s disbandment, the musician worked with Devin the Dude on a single “What a Job” from the album, Waitin' to Inhale. Another guest artist of the single was Snoop Dogg. The song reached the 124th spot of Hot R&B/Hip-Hop Songs Chart. The same year, the rapper was nominated for two Grammy Awards. One was for Best Urban/Alternative Performance for the single "Idlewild Blue (Don't Chu Worry 'Bout Me)". The other one was for the song “Mighty O” as Best Rap Performance By a Duo or Group. Both nominations were for his work as part of OutKast. At that time, many organizers tried to book Andre 3000 for their events.

In 2008, together with Big Boi, Andre recorded “Royal Flush”. The same year, he worked with John Legend on “Green Light”. The latter turned out to be a huge hit and went platinum. The single "International Player's Anthem (I Choose You)", recorded with UGK, was nominated for a Grammy Award as Best Rap Performance By a Duo or Group. Next year, the single “Royal Flush” was also nominated for a Grammy in the same category.

In 2010, the rapper worked hard to help other artists with recording their popular singles. He assisted with such hits as Ciara’s "Ride" (Bei Maejor Remix)” and Big Boi’s and Sleepy Brown’s "Lookin' for Ya". Together with Chris Brown, Drake, Kanye West, T.I., and Fabolous, he worked on "Deuces" (Remix)”.

In 2011, the singer collaborated with other musicians again. This time Andre 3000 helped Lloyd record a big hit "Dedication to My Ex (Miss That)". It reached the 3rd spot on the UK Singles Chart and climbed to the 79th spot of the Billboard 200. The song earned three platinum certifications in Australia. For the single “Party”, recorded with Beyoncé, Andre was nominated for a Grammy Award in 2012 as Best Rap/Sung Collaboration. The same year, he worked on several singles with T.I.

Between 2013 and 2016, the rapper recorded more songs with other artists. The most successful one was “I Do” with Young Jeezy. Andre also helped Frank Ocean record his album Channel Orange.

Since 2003, the artist has been working on his acting career. He appeared in numerous Hollywood movies and TV projects. His most successful role was in the movie Jimi: All Is by My Side (2013). Andre landed the leading role of Jimmy Hendrix. It brought him an Independent Spirit Award for Best Male Lead.

In 2018, Andre released a long-awaited album. It was an EP called Look Ma No Hands. The ratings are yet to be seen.