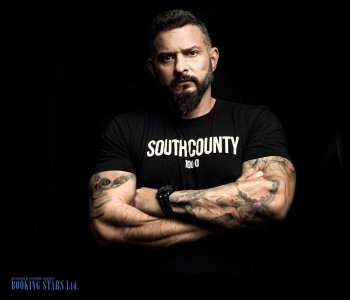 Andy Frisella is an entrepreneur and an influencer. He is the CEO of 1st Phorm International and host of the MFCEO Project Podcast. Frisella is also a realist who puts on straightforward theories towards success and achievement. In addition, he also puts up some motivational talks to push his followers.

Frisella also specializes in brand building and marketing. He has also published a book and established himself as an author. Let’s get to know more about Andy and his life in detail. Know Chase Chrisley’s net worth here.

There are no precise details about Andy’s birthdate and early life. He was born in America which makes his nationality an American. Andy describes himself as an underachiever during his childhood and his teenage years. Frisella in his blog has candidly spoken of his issues during childhood which was weight issues to school issues causing him a lot of trouble. Though there are no exact facts from his earlier life, he has somewhat let people know about his struggles before becoming successful. He writes;

“School never came easy to me. I was always told I was dumb by my teachers. Later, I would learn that I did have some natural intelligence, but nonetheless I did terrible in school.  My grades sucked … D’s were the norm for me.”

Andy Frisella started out as an entrepreneur while he was only 19. He along with his friend started the supplement store in the beginning. After which he never had to look back as he went on to achieve greater measures of success. Frisella then found his niche in health and fitness and successfully launched some of the brands. He at present is the owner of Supplement Superstores, Paradise Distribution, and the renowned fitness brand 1st Phorm International. Not only that but he also launched the highly successful podcast called The MFCEO Project. In this podcast, Frisella often makes blunt comments and advice to aspiring entrepreneurs.

With an aggressive approach to business concepts and success Frisella is surely a unique business figure. While many are interested in learning about the tactics of this successful man. A lot of people are eager to also know about his personal life which rarely comes to the forefront.

Andy Frisella is currently married to his wife Emily Frisella. Emily following in the footsteps of her husband, Andy has a Youtube account where she often posts videos. She already has around 10k subscribers on her Youtube channel. In addition, she also posted a recent video doing couple Q&A with her husband Andy.

Andy Frisella has been a Forbes magazines favorite as he was featured twice to be exact. Frisella has already made a trademark with his name establishing himself as an entrepreneur and a CEO of businesses that make millions of income each year. He became the man responsible for bringing in a $100M through his career. Though these details are available, his net worth estimation is still a mystery.

Frisella, also a social media influencer has around 898k followers on his official Instagram page. In addition, he also has his very own website where all details about his work and himself are written.