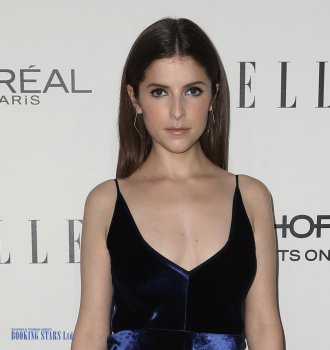 Anna Kendrick is an American actress and singer. She was born on August 9, 1985, in Maine, USA. She is mostly famous for her roles in various movies and TV series. Kendrick most popular single “Cups” got into US, UK, and European music charts.

When Anna was 10 years all she went to an audition in New York. Two years later, she had an agent and landed a role in a Broadway musical High Society. Anne stopped just short of getting a leading role. But even a supporting role got her several theater award nominations, including a Tony.

In 2003, Anna worked on a TV musical Camp, where she again had a secondary role. The movie was a success and it was nominated for Chlotrudis and Independent Spirit Award. After the movie’s release, Anne took a 3-year break.

In 2007, Kendrick played a debate-loving girl in Rocket Science. Critics gave her the best reviews and Anna received an Independent Spirit Award. Later that year, she auditioned for Twilight, where she got the role of Bella’s friend Jessica Stanley.

In 2009, Kendrick played with Ben Stiller in The Marc Pease Experience. The same year she finally landed a leading role in Elsewhere.

The turning point of Kendrick’s career happened when she was cast for Up in the Air with George Clooney. She got an Oscar, Golden Globe, and BAFTA nominations. MTV awards called her “Breakthrough of the Year”.

Kendrick went on to work on more movies. In 2012, she played in six movies and one of them, a musical comedy, Pitch Perfect became her most popular work so far. She landed a leading role. The movie received several awards from MTV. Three years later, a sequel was released. The single “Cups” from the movie’s soundtrack was performed by Kendrick and after it’s release in 2013 conquered the music charts. The third part of Pitch Perfect is due out in 2017. Kendrick was the voice of Poppy in the animated movie Trolls.

Kendrick continues to work on her movie roles. She gladly participates in comedies, musicals, crime, and even horror movies.