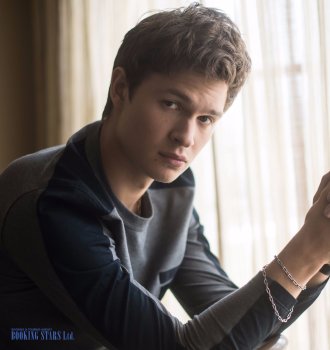 Ansel Elgort was born on 14 March 1994 in New York. His father Arthur Elgort is a famous Vogue photographer. His mother, Grethe Barrett Holby, is a producer, choreographer, and a stage director. When Ansel was 12 years old, he started taking acting courses. He also landed the starring part in the school musical Guys and Dolls.

In 2013, Elgort began his professional acting career by getting a supporting role in the movie Carrie. The same year, he debuted in the music world under the pseudonym Ansølo with a remix of Zedd’s song "Clarity".

In a dystopian science fiction movie Divergent, which premiered on March 14, 2014, Elgort had an outstanding role of Caleb Prior, the brother of Beatrice Prior, who was portrayed by Shailene Woodley.

The real fame and critics’ recognition came to Ansel when he landed the leading role in the romantic drama The Fault in Our Stars, where he again played with Shailene Woodley. This movie brought the duo many awards, including Teen Choice Awards for "Choice Movie: Liplock" and "Choice Movie: Chemistry". Elgort himself earned a prize at Teen Choice Awards as "Choice Movie Actor: Drama" and "Choice Movie: Breakout Star". He also received several other awards and nominations. From that moment on, many fans wanted to book Ansel Elgort’s presence at their events but his schedule was getting tougher and tougher.

The sequel of Divergent came out in 2015. The movie was called The Divergent Series: Insurgent. Again, Ansel portrayed Caleb Prior. Even though the movie didn’t earn many positive reviews from the critics, Ansel’s acting was rated high. He was nominated for Teen Choice Awards in the "Choice Movie Actor: Action" category.

Elgort continued working on his music career. Together with Too Many Zooz, he released another single "To Life". He also created a remix of Galantis’ "Runaway (U & I)".

The third part of the Divergent trilogy, The Divergent Series: Allegiant, came out in 2016. However, the movie wasn’t commercially successful. A bit later, Elgort presented two new singles "Yin Yang" (with Maxum) and "Home Alone". He also came up with another remix. This time, the artist worked on "I Wanna Know", initially recorded by Alesso featuring Nico & Vinz.

In 2017, Ansel finally landed a leading role in the comedy Baby Driver. Elgort portrayed a getaway driver Miles nicknamed Baby. The movie earned high scores from the critics and received a variety of prestigious awards and nominations. Among them are three Academy Awards and two BAFTA nominations. Elgort earned a Golden Globe nomination as Best Actor – Motion Picture Musical or Comedy and Esquire’s Empire Award nomination as "Best Male Newcomer".

At the end of 2017, Ansel appeared as a teenager in a crime drama November Criminals. The same year he released several singles, including "Thief", "You Can Count on Me", and "All I Think About Is You". At the beginning of 2018, the artist released an EP Super Nova and a single with the same title.

In 2018 – 2019, Ansel’s fans are waiting for two movies, Billionaire Boys Club and The Goldfinch.