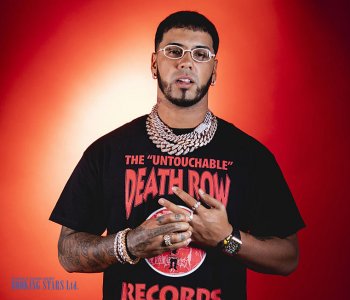 Anuel aa - His real name is Gazmey Emmanuel. He works in the rap style, and a touch of light criminal romance is immediately noticeable on all his work.

The musician was born into the family of Jose Gozmei, a businessman and music producer, owner of his own record labels. He finished school in Carolina, and already in his school years his irrepressible interest in music became noticeable. He was interested in literally everything, from just listening to music in his free time, ending with writing his own songs. Most likely, he inherited a craving for music from his father. He is still grateful to him for the fact that his father helped him start a musical career, helped with the recording of the first songs and introduced him to the right people.

In 2010, the young man decided to start a solo career. He posted his first songs on social networks, his father helped him with their recording. However, the first attempts to show the world their creativity were not crowned with success. The young man decided not to lose heart and go his own way, in the hope that his music will find his own listener and lover.

Popularity came to Anuel Aa in 2019. He was offered cooperation by a music label called "Maybach Music". Thanks to a fruitful collaboration with this label, the musician began to gain popularity in the United States of America and Puerto Rico.

In 2016 he released the track "La Ocasiуn", which gave him worldwide fame. A video was shot for the song, which collected more than half a billion views on the YouTube site.

In the same 2016, the rapper's career stalled. The fact is that after relaxing in a nightclub, he returned home in his own car. Law enforcement officers stopped him to check his documents and found firearms in his car, namely 3 pistols, one of which turned out to be stolen. A criminal case was opened against the musician. Fans from all over the world signed petitions, staged demonstrations and asked to release their idol. Rumors have surfaced in the press that the young man is a member of a criminal group that distributes and sells drugs. However, these rumors turned out to be just someone's idle speculation, but for the illegal possession of weapons, the musician was punished with 30 months in prison.

Anuel Aa has clearly demonstrated to his fans, journalists, press and music critics that music is not just a hobby for him. Music is his life. Even sitting in prison, he did not stop doing creative work. He had to record songs on a mobile phone dictaphone and send them to producers.

On the day of his release from prison, Emmanuelle releases his full-length solo album entitled "Real Hasta La Muerte". It instantly gets the highest number of downloads on the Apple Music platform and goes platinum.

His lyrics contain many references to dirty sex, drugs, crime, murder, guns, street life, male friendship. At the same time, it found a response in the hearts of many of his fans.

Emmanuelle carefully hides information about his personal life. It is known that he is not officially married and has no children.

Thus, the world of the Latin American turnip is a special sphere where all people are brothers to each other, where street laws, showdowns and shootouts reign, but at the same time admirers see in such a life a special, only they understandable romance.