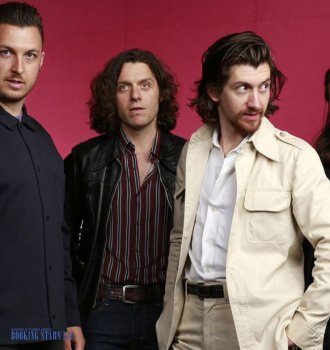 British rock group Arctic Monkeys was formed in Sheffield, England in 2002. Its two founders Alex Turner and Matt Helders were friends since childhood. In high school, they met Andy Nicholson. All three of them enjoyed hip-hop and rock. On weekends, they got together and used Cubase software to create their own songs.

In 2001, the aspiring artists became fans of an indie rock group, The Strokes, which was quickly gaining popularity. For Christmas, Turner’s parents gave him an electric guitar. The young man started learning how to play it and invited his neighbor, Jamie Cook, who also had one. Shortly, the artists decided to form a band. Andy Nicholson played bass guitar. Matt Helders became a drummer.

The musicians rehearsed in their parents’ garages. Then they found an empty warehouse and continued playing there. Turner shared his songs with the group members. The band mostly played cover versions of the hits recorded by popular rock groups, but they had a few of their own songs as well.

The band gave its first concert in June 2003 in a London pub, The Grapes. After a few performances, the musicians recorded a demo album, Beneath the Boardwalk. The artists gave the tapes out for free during their concerts. In 2004, the album was uploaded to the Internet. The group started acquiring more and more fans.

In May 2005, Arctic Monkeys released an EP, Five Minutes with Arctic Monkeys. It sold about 1,000 copies. It was also available for downloading on iTunes. In June, the band signed a contract with Domino Records.

In October 2005, the artists released a single “I Bet You Look Good on the Dancefloor”, which topped the UK Singles Chart and the UK Indie Chart. It also came in seventh on US Alternative Songs Chart. The single was named the Best Track at NME Awards in 2006. NME magazine put the song on the 500 best songs of all times list. The single had the 7th position. At that time, many fans tried to book Arctic Monkeys for private events.

In January 2006, the group released its debut LP, Whatever People Say I Am, That’s What I’m Not. It sold more than 360,000 copies in the first week. It became one of the best-sold debut albums in the history of British music. It topped British, Irish, and Australian charts. The single “When the Sun Goes Down” conquered the UK Singles Chart and UK Indie Singles Chart.

In April, Arctic Monkeys presented an EP, Who the Fuck Are Arctic Monkeys? Since it contained offensive language, the album didn’t appear on the radio. However, it didn’t stop the fans from enjoying it.

In 2006, Andy Nicholson left the band. He was replaced by Nick O’Malley, who used to play with the local group, The Dodgems. In August, Arctic Monkeys presented a new single, “Leave Before the Lights Come On”, which topped UK Singles and UK Indie Singles Charts.

In April 2007, the group recorded its second LP, Favourite Worst Nightmare, which topped the UK Albums Chart and came in 7th on Billboard 200. The track “Brainstorm”, released as a single, conquered the UK Indie Singles Chart and came in 14th on US Bubbling Under Hot 100 Singles Chart. In June, the band embarked on a tour to support the LP. It also performed at different music festivals.

In August 2009, the third LP, Humbug, was ready. It topped the official British chart and came in 15th on Billboard 200. Next summer, the new LP, Suck It and See, came out. It topped British charts and settled on the 2nd spot of US Top Tastemaker Albums Chart.

In September 2013, the group presented its fifth LP, AM, which topped British and American charts. After finishing the supporting tour, in 2014, the artists declared a hiatus. Each one of them worked on other projects.

In 2016, Arctic Monkeys resumed its work and started recording a new LP. Tranquility Base Hotel & Casino came out in May 2018. It topped UK Albums Chart and came in 8th on Billboard 200.