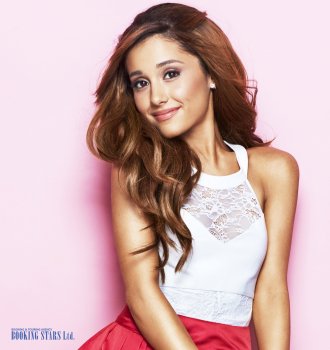 Ariana Grande is one of the most popular girls in the world, whose beautiful appearance and wonderful voice gained lots of different fans from every corner of the world. They are looking forward to her new CD releases and films.

A famous singer and actress Ariana Grande was born in 1993 in Florida. Her parents are successful people - when Ariana was born, her father was an owner of art and design company, her mother worked as an executive director.

Grande's parents always support her and her older brother Franky, who is now her producer.

Ariana was involved into the world of theatre and songs when she was a little child - she attended special lessons at the local theatre.

Musical "Anny" was her debut, then Grande took part in "The Wizard of Oz" and "Beauty and the Beast".

In 2010 Ariana landed a role in an American situation comedy "Victoriuos".

When she was 18, she released her first music album "Put your hearts up", which gained popularity and appealed to lots of fans. Later Ariana launched two albums - "yours truly" and "Christmas Kisses". Critics and fans were glad to listen to new tracks and said that she sharpened her vocal skills and made her good qualities stand out. "Yours truly" became the first on Billboard 200.

"My everything" album got the first leading position on an American chart, and in 2015 the singer had her world tour under the name "The Honeymoon World Tour".

According to Ariana, she likes to act, but music will be always the main thing for her.

It is interesting to note, that Ariana Grande supports LGBT-community and takes part in Miley Cyrus's charity fund called "The Happy Hippie Foundation".