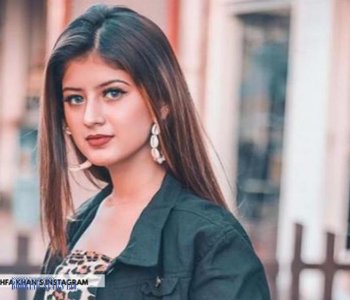 Arishfa Khan is an Indian actor and social media personality. She is one of the most-followed stars on TikTok and one of the most-followed Indian celebrities. As a fashion blogger, she is beloved for her looks on social media. Arishfa Khan was born on April 3, 2003 Shahjahanpur, Lucknow. She attended Ryan International School in Mumbai, India. Her mother’s name is Arshi Naaz and her family is Islam; she has one sister named Arisha Khan.

The actress started her acting career at an early age. She made her acting debut on the 2012 Indian TV show “Chhal-Sheh Aur Maat.” That same year, she took a role in the popular Indian series “Ek Veer Ki Ardaas…Veera” as Gunjan.

In the following years, Arishfa starred in a number of shows, including “Jeannie Aur Juju” in 2012, “Uttaran” in 2008 and “Meri Durga” in 2017. In addition, she has appeared in several episodes of “Crime Patrol” as well as Star Bharat’s TV show “Papa By Chance.”

In addition, Arishfa has been featured in a number of Hindi and Punjabi music videos.

The Indian influencer started her TikTok and grew to popularity by posting dancing videos, fashion videos and lip sync videos. She has become one of the most-followed influencers on the platform.

Arishfa keeps her personal life under wraps, and does not talk much about her mother and sister.

In the past, it was rumored that Arishfa was dating the late TikTok star Danish Zehen, who passed away in a traffic collision in 2018. However, she denied the rumors at the time.

Following the death of the late TikTok star Danish Zehen, Arishfa was involved in some controversy with his brother, Guffran. She said Danish’s death and being linked to Danish ruined her family’s name and almost led her mother to commit suicide. Since then, the situation has smoothed over.