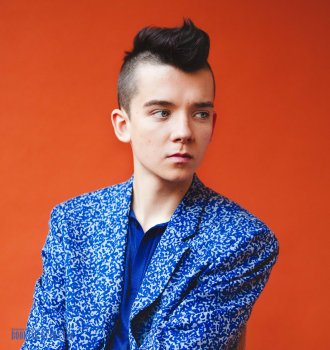 Asa Maxwell Thornton Farr Butterfield was born on 1 April 1997 in London. Asa wanted to become an actor since childhood and his family supported the desire. Butterfield started performing in the Young Actors' Theatre Islington when he was just seven years old.

When the young actor was just 9 years old, he debuted on TV in the drama After Thomas, in which he played a small supporting role. A year later, Asa debuted on the big screen in Garth Jennings’ comedy Son of Rambow. The movie received positive reviews from the critics and earned several prestigious awards and nominations.

Asa’s breakthrough role came to him in 2006, when he performed in the drama The Boy in the Striped Pyjamas. The filming was done in Budapest and came to an end in 2008. Asa played a German boy Bruno, who was friends with another boy from a German concentration camp. In the end, both died in the gas chamber. The movie was a big hit. It earned a variety of prestigious awards and nominations. The young actor was nominated for a prize at British Independent Film Awards in the "Most Promising Newcomer" category, Young Artist Awards for "Best Leading Performance (International Feature Film)", and several more.

At about the same time, Asa appeared in a few episodes of the TV series Merlin, in which he portrayed a druid boy Mordred.

In 2010, Butterfield tried himself in a horror movie, The Wolfman. Even though the young man had a small role, he got to work alongside such celebrities as Benicio Del Toro and Anthony Hopkins. The same year, Asa landed a role in the movie Nanny McPhee and the Big Bang. In the film, he worked together with Emma Thompson, which was an exciting experience for the actor. The movie was commercially successful and earned high scores from the critics.

Butterfield’s next big project was one of the leading roles in Martin Scorsese’s Hugo. The movie received 11 Academy Awards nominations and won five prizes. For his role of Hugo, Asa earned a prize from Las Vegas Film Critics Society in the "Best Youth in Film" category.

In 2013, Asa scored another big project. He portrayed Ender Wiggin in the sci-fi drama Ender's Game. The performance brought the young actor a Saturn Awards nomination.

A year later, when the actor turned 17, he worked on another movie called A Brilliant Young Mind. Asa did an excellent job portraying a young autistic mathematician Nathan Ellis. The role brought him his first adult nomination as "Best Actor" at British Independent Film Awards.

Asa’s next leading role was in the drama Ten Thousand Saints directed by Shari Springer Berman and Robert Pulcini. The movie premiered in January 2015 at the Sundance Film Festival.

In 2017, the actor’s fans saw four movies where Asa had the leading roles. They were a romantic sci-fi drama The Space Between Us, The House of Tomorrow, Journey's End, and Time Freak. The fans were hoping to book Asa Butterfield’s presence at their private events, but it was quite hard.

In 2018, the fans are expecting to see two more movies with Asa Butterfield.