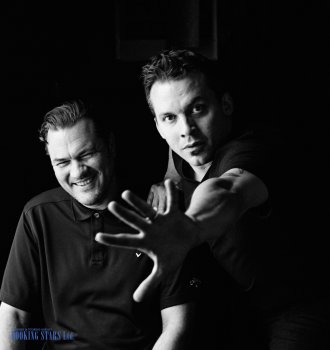 Sean Michael Daley and Derek Turner knew each other since high school. In 1989, when they were still teenagers, the young men adopted pseudonyms Slug and D-Spawn and formed a band. A little later, they invited a producer Anthony Davis, who was better known under the pseudonym Ant. Currently, the band’s lineup includes just two members, Slug and Ant.

In 1990’s, Atmosphere for some time worked with other rappers Musab, Phull Surkle, Black Hole, and The Abstract Pack. The joint group was called Headshots. They released a few songs, which were popular on the local level. Later, the band members founded a recording label called Rhymesayers.

In 1997, Atmosphere released their first studio album Overcast! under Rhymesayers. The LP didn’t make it into the charts. Soon after the release, D-Spawn left the band.

In 2000, the duo released two EPs, Ford One and Ford Two. A year later, they presented The Lucy EP. The three albums were later combined into one compilation disc called Lucy Ford: The Atmosphere EP's. It was showing such good sales that was later re-released as a studio album.

The long-awaited fame came to Atmosphere in June 2002 when they released the LP, God Loves Ugly. The single "Modern Man's Hustle", which was featured on the album, reached the 18th spot on Billboard Hot Rap Tracks. The LP itself made it into Billboard 200. Even though the position wasn’t high (139), it was a big success for the group. Nine years later, Complex Magazine gave "Modern Man's Hustle" the 6th spot on its list of "25 Best Rhymesayers Songs".

The band’s popularity resulted in a variety of offers with large recording labels. However, they refused to work with anyone and continued releasing albums under Rhymesayers. That didn’t stop the fans from trying hard to book Atmosphere for their private events.

In 2003, the group released Seven's Travels. It reached the 84th spot on Billboard 200 and the 5th position on Top Independent Albums. The music videos for the singles from the LP made it to MTV2 and helped the band become even more popular.

In 2005, Atmospheres presented its 4th LP, You Can't Imagine How Much Fun We're Having. It topped Top Independent Albums Charts and earned high scores from the critics.

In 2008, the band released the 5th LP, When Life Gives You Lemons, You Paint That Shit Gold. It debuted on the 5th position of Billboard 200, showing the best results in this chart for the band so far.

In 2010, the band recorded a double EP called To All My Friends, Blood Makes the Blade Holy: The Atmosphere EP's. It debuted on the 38th spot of Billboard 200 and showed impressive sales. A week after the release, the record climbed to the 2nd spot of the top-10 most downloaded albums on iTunes.

The sixth studio LP, The Family Sign, came out in 2012. It featured a better music variety since the duo invited a guitarist and keyboardist. The LP reached the 13th spot on Billboard 200.

In 2014, Atmosphere presented another LP Southsiders. It reached the 8th position on Billboard 200. The album also became popular in the UK, where it settled on the 33rd spot on UK R&B Albums Chart.

In 2016, the duo recorded its 8th studio LP, Fishing Blues. It climbed to the 22nd spot on Billboard 200 and showed good results in Sweden.

Even though the band is almost 30 years old, its popularity doesn’t seem to be waning.