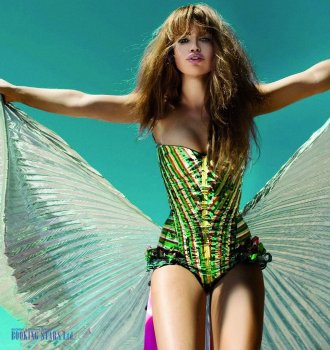 Aura Dione (real name Maria Louise Joensen) was born on January 21, 1985, in Copenhagen, Denmark. She is a singer and a songwriter, whose singles and albums are famous all over Europe. Dione is mostly known for her songs “I Will Love You Monday (365)” and Geronimo.

In 2007, Dione released her debut single “Something from Nothing”. It received golden status in Denmark and reached 7th spot on the Danish singles chart. The same year, Aura recorded another single “Song for Sophie”, which was less popular than her debut song but still received a golden status in the singer’s home country.

In 2008, Dione released her first album Columbine. The album sold 100,000 copies in the world and 20,000 in Denmark. It reached the 3rd spot in the Danish albums chart and got into Austrian, German and Swiss charts. The LP received golden status in Denmark. A single from that album, “I Will Love You Monday (365)” didn’t make the Danish charts but became number 1 in Germany, where it went platinum. It also received platinum status in Austria and Switzerland.

In 2011, Aura released her second album Before the Dinosaurs. The first single from that album “Geronimo” became the most popular Dione’s song. It made it into the German Media Control charts, as well as Danish and Austrian charts. The track became platinum in Germany and Denmark and received a golden status in Austria and Switzerland. Two more singles from that album “Friends” and “In Love With the World” became popular all over the world. The same year, Dione received a European Border Breakers Award for International Breakthrough.

Dione took a break and returned to recording her third studio album in 2016. She released two singles “Love Somebody” and “Indian Giver” in 2016. The first one reached 27th spot on the Danish chart. The second didn’t make it into the charts.

Aura Dione is a great choice for you and your guests! Do not miss a chance to hear your favorite songs at your event and create the most memorable day!