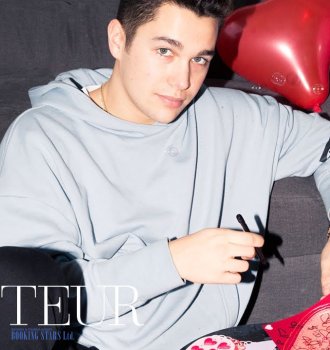 Austin Harris Mahone was born on 4 April 1996 in San Antonio, Texas. His father died when the boy was just 18 months old. He was brought up by his mother. The singer attended Lady Bird Johnson High School but then dropped out to be homeschooled.

The artist enjoyed music since childhood. Since the boy spent plenty of time at home, he had an opportunity to hone his singing skills. In June 2010, the teenager created a YouTube channel and uploaded his first video. Throughout 2011, Austin has been improving his song collection. His subscribers were amazed at the quality of Mahone’s cover of Justin Bieber’s "Mistletoe". In February 2012, the musician uploaded his first single “11:11” to iTunes. Four months later, he presented “Say Somethin.”

Since 2012, the artist has been getting many offers to perform in commercials. He became an ambassador of Trukfit, a company, which sells fashionable clothing. He also appeared in McDonald’s ads.

In December 2012, together with the rapper Flo Rida, Austin recorded a single “Say You're Just a Friend", which later came out in an acoustic piano version. In one of the interviews, the artist said that he wanted to release a special version of the song, which would show the power of his vocal talent.

Pretty soon, the artist collected enough songs to release an album. In May 2013, he presented his debut EP, Extended Play. It featured the already popular songs "Say You're Just a Friend" and "Say Somethin”. The album came out in different formats. It appeared in Japan and climbed the 17th spot of Japanese Albums Chart (Oricon).

In June 2013, the artist recorded a single "What About Love”, the music video for which brought him a prize at MTV Video Music Awards for MTV's Artists to Watch. He performed it as an opening act during Taylor Swift’s Red Tour. Then he was invited to MTV's Artist to Watch Tour.

In 2013, the artist showed off his acting skills. Since July 2013, Austin’s voice is part of Becky G’s song for the animated movie The Smurfs 2. Austin also played himself in the TV series Big Time Rush.

The year 2014 was busy for the artist. He recorded the second EP, The Secret. It featured such hits as "Till I Find You", "Mmm Yeah", "Next to You", and "Can't Fight This Love". To support the album, he went on Austin Mahone: Live on Tour. The LP was successful in many countries. It appeared on the charts in the USA, Europe, Canada, and Australia. About 100,000 copies were sold in the USA.

The same year Austin played in the TV series Fashion Police and The Millers.

In 2015, the singer recorded his debut mixtape, This Is Not the Album, which featured 19 songs, including the popular "Put It on Me", "Brand New", "On Your Way", and "Same Girl". A year later, he presented another mixtape, ForMe+You. Some of the songs were recorded with such successful rappers as Juicy J, Pitbull, and 2 Chainz.

In 2017, Austin presented his debut LP, Dirty Work – The Album. The album was released in Japan and climbed to the 34th spot of Oricon Charts. It featured such hits as "Dirty Work", "Lady", and "Creatures of the Night".

In 2018, Mahone released another EP, Oxygen. Even though it didn’t make it into the charts, the fans still appreciated it greatly. The album consisted of just four songs. They were "Oxygen", "So Good", "On My Way", and "Say Hi".