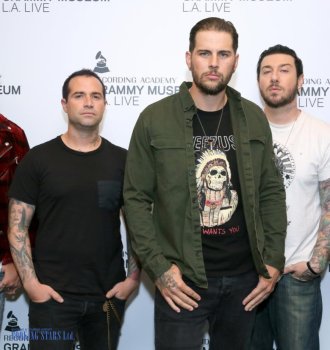 Avenged Sevenfold (also known as A7X) created a very interesting mix of screaming vocals with hardcore guitar. This combination helped young musicians attack pop music, which they disliked. Even though the band’s name came from the Bible, the artists sing about the criminal way of life, drugs, and horrors.

The group was founded in 1999 in California. Back then the Avenged Sevenfold’s founders M. Shadows (real name Matthew Charles Sanders) and Zacky Vengeance (real name Zachary James Baker) were still attending high school. Later, they were joined by several other band members. The group’s lineup was constantly changing. Today, only three people from the original lineup still perform with the group. They are the founders and the bassist Johnny Christ.

In 2001, the group signed a contract with a Belgian record label, Good Life Recordings, and released its first studio LP, Sounding the Seventh Trumpet. The album failed to make it into the charts but caught the attention of bigger labels. In 2002, Avenged Sevenfold signed a contract with Hopeless Records. That label re-released the band's debut LP.

In 2003, Avenged Sevenfold recorded a new album, Waking the Fallen. The LP reached the 10th spot on Billboard 200 and the 12th spot on Top Independent Albums. It was a very successful beginning for the group. Thanks to the success of the LP, Avenged signed a contract with a major recording label Warner Bros. The group was becoming more and more popular. It was hard to book Avenged Sevenfold for any private event.

In 2005, the band presented the LP, City of Evil. Even though it didn’t do such a great job reaching high spots on the charts as its predecessor, it turned out to be much more financially successful. The album earned a gold status from RIAA. More than 1.3 million copies were sold in the USA and 200,000 more in the UK. Two singles from the album, "Beast and the Harlot" and "Bat Country", became hits.

In 2006, the group received several awards. The most important one at that time was Best New Artist at MTV Music Awards. The same year they earned a prize at Golden God Awards as Best International Band.

In 2007, the band recorded, Avenged Sevenfold, which brought the artists the long-awaited high spots on the charts. Even though it wasn’t as commercially successful as City of Evil, it topped many world charts, including Billboard 200. The singles “Almost Easy” and “Afterlife” became hits.

In 2010, A7X released Nightmare. The LP climbed to the top of Billboard 200 and Canadian Albums Chart. It was also very successful in Finland and Ireland. Almost a million copies were sold in the USA, which brought the album a gold status from RIAA.

In 2013, the group released a new LP, Hail To The King. It topped Billboard 200, UK Albums Chart and earned a platinum status in the UK. The like-named lead single received a gold certification from RIAA.

In 2016, the band recorded its last album to date, The Stage. The LP showed good results on the charts and sold over 170,000 copies.

In 2018, The Stage was nominated for a Grammy Award and earned a prize at Loudwire Music Awards as Metal Album of the Year. In the summer, the group will go on an End Of The World Tour.