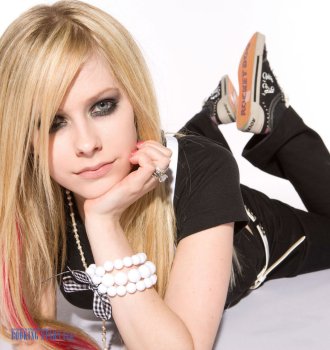 Avril Ramona Lavigne was born on January 27, 1984, in Canada. This Canadian singer, songwriter and actress achieved international popularity. She is mostly popular for her songs are “Complicated”, “Girlfriend”, and “Don’t Tell Me”. Lavigne holds various music awards.

Avril was interested in music ever since she was two years old and sang at church services. Her parents bought her various music instruments and she created her own little music studio. The girl was invited to various city fairs, where she performed her country-style songs. When Avril was 14, she won a radio contest and went to Ottawa where she sang with Shania Twain. Sometime later, she was noticed by Cliff Fabri who convinced Avril to send her songs to different labels. After that, Lavigne was invited to the USA. At 16, she quit school and moved to New York.

After the first audition, Avril signed a contract with Arista Records. In 2002, she released her first album Let’s Go, which immediately became a huge hit and beat all the records. In just 4 months the album became platinum in the USA. Avril received various MTV awards, a Grammy, and Juno.

In 2004, Avril released her second album Under My Skin, which conquered the charts. The album sold 12 million copies worldwide. The singles from that album “Don’t Tell Me”, “My Happy Ending”, and “Nobody’s Home” became top hits. After the release of this album, Avril went to tour the world.

In 2007, Lavigne recorded and released her third album The Best Damn Thing. The LP was just as successful as the previous two LP. That year Avril was included into the Forbes list of the richest young people on the planet.

In 2011, Avril released her fourth album Goodbye Lullaby. It was less popular than her previous two LPs but still sold over 3 million copies worldwide and went platinum in various countries. A single from that album “What the Hell” reached 11th place on Billboard Hot 100.

In 2013, Lavigne released her fifth album Avril Lavigne, which sold over 2 million copies worldwide. The popularity of Lavigne’s music was slowly waning but she was still making her way into the most popular international charts.

Right now Avril Lavigne is working on a new album, which is due to be out in the end of 2017.