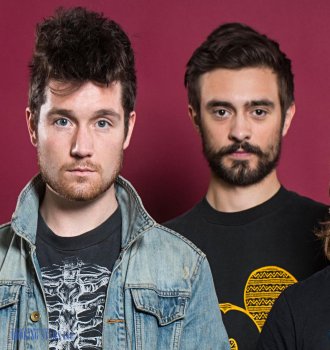 Bastille is a British band, which was established in 2010. The lineup includes Dan Smith, Kyle Simmons, Will Farquarson, and Chris Wood. The most famous songs of this indie pop band are “Pompeii”, “Of the Night”, and “Things We Lost in the Fire”.

Initially, Bastille was a solo project created for a singer, producer, and songwriter Dan Smith. Later, Smith made a decision to create a band. The name of the band comes from Smith’s birthday, which is 14th July, which is Bastille Day.
In 2011, Bastille released the debut song “Flaws/Icarus” with an independent label Young & Lost Club. The single didn’t make it into the charts and didn’t become a part of any of the group’s albums.
The band gained some popularity online after uploading the song to YouTube. The group performed at a few British music festivals, including Glastonbury, Isle of Wight and Blissfield’s.
In 2012, the group signed a contract with Virgin records and released a new single “Overjoyed”. The song didn’t make it into the charts. But two more singles released the same year “Bad Blood” and “Flaws” reached 90th and 21st spot in the UK Singles Chart accordingly. Both received golden status.

In 2013, the band released their most famous single “Pompeii”, which reached the 2nd spot of the UK Singles Chart. The same year, the band released their debut album Bad Blood, which topped the UK Albums chart. The album was so popular that it was rereleased with a new name All This Bad Blood. The second LP included songs, which were never released before and two new ones. One of the new songs was single “Of the Night”, which was a mix of two popular songs of the 1990’s “The Rhythm Of The Night” (Corona) and “Rhythm Is A Dancer”(Snap!). The song went platinum and reached a second spot of the UK Singles Chart.
In 2016, the band released their second studio album Wild World. It topped the UK albums chart and received gold status. A single from that album “Good Grief” is very popular in the UK and all over Europe. The band continues to write and record new songs.
Bastille is a great choice for your event! Do not miss a chance to hear your favorite songs at your event and create the most unforgettable atmosphere!
Book Bastille