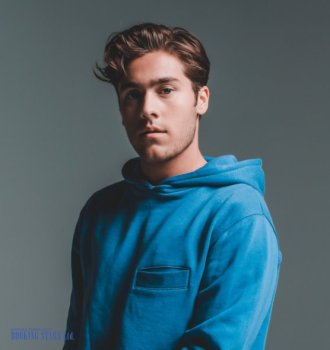 Benjamin Ingrosso was born in 1997 in Stockholm suburbs. His father Emilio Ingrosso used to dance professionally. Now he owns a restaurant. Ingrosso’s mother, Pernilla Wahlgren, is a well-known Swedish singer. Both parents have an Italian heritage. Benjamin has an older brother and a sister. His parents and close relatives all worked in show business. So the boy was growing up listening to music and performing. When he was just 8 years old, Ingrosso performed with a song “Hej Sofia” at a local singing contest Little Melodifestivalen. With the same song, the boy appeared in a children’s singing competition, Melodi Grand Prix Nordic, where he came in fourth.

In 2007, Benjamin recorded a cover of the single “Jag Är en Astronaut”, which his uncle Linus Wahlgren, released back in 1985. The single came in 2nd on the national Swedish chart. In June, together with his mother, the boy performed in a music show Allsång på Skansen. The same summer, he toured Sweden with many famous artists as part of the Diggiloo show. In 2008 and 2009, Benjamin performed in a musical Hujeda mej vá många sånger.

In 2009, Ben and his mom sang several The Jackson 5’s songs in Swedish. At the end of the year, the artist portrayed Rasmus in the play Rasmus And The Vagabond. In 2011, the boy performed in the Stockholm Theatre. He got the role of Lillebror from Karlsson-on-the-Roof.

In the spring of 2014, the young man participated in the Swedish dance contest, Let’s Dance. His partner and tutor was a professional dancer Sigrid Bernson, who has already won the contest before. The artists won the competition in May 2014. The same year, Benjamin decided to devote himself to singing rather than performing in the theater and dancing.

The young artist signed a contract with a Swedish label TEN Music Group. In October 2015, he released a single “Fall in Love”, which reached the 56th spot on the local chart. Then he recorded “Crystal Clear” and “Home for Christmas”. At about the same time, the TV-series Wahlgrens värld aired. It described the life of Benjamin’s mother and her family. Benjamin participated in the filming.

In 2016, Benjamin released a single “Love You Again”, which didn’t make it into the charts. In February 2017, the singer participated in a singing contest, Melodifestivalen. With his song “Good Lovin”, he came in 5th. Soon the single came out officially. It reached the 10th spot on the national Swedish chart and went platinum. In May 2017, Ingrosso released a single “Do You Think About Me”. Three months later, he presented “One More Time”. The artist also filmed music videos for both. At that time, many fans started trying to book Benjamin Ingrosso for private events.

In February 2018, the artist attended Melodifestivalen one more time with his new song “Dance You Off”. He managed to impress the judges and the audience. Finally, Ingrosso won the contest. As a winner of the national competition, Benjamin got an opportunity to represent Sweden on Eurovision 2018. In May, at the Eurovision finals in Lisbon, the singer reached the 7th place. In Sweden, the single topped the charts. It also appeared on other European charts.

In May 2018, Ingrosso and another young Swedish singer Felix Sandman recorded a single “Tror du att han bryr sig”, which came in 7th on Sverigetopplistan. In July, the artist presented a new song, “I Wouldn't Know”, which settled on the 30th spot of the chart. In August, a French duo Ofenbach recorded a single “Paradise” with Benjamin’s assistance.

In September, the artist finally presented his first LP, Identification. It turned out to be very successful, earning positive reviews from the critics. The album topped the Swedish chart. One of the top singles from the album, “Behave”, came in 8th on the chart.