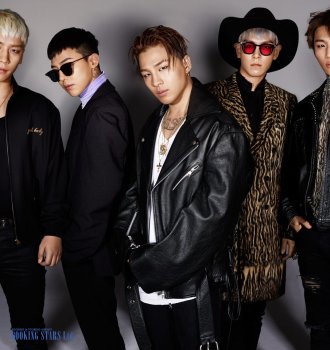 Big Bang was formed in 2006 in Seoul, South Korea. Its members are G-Dragon, T.O.P, Taeyang, Daesung, and Seungri. In the past 12 years, the lineup hasn’t changed. The project belongs to YG Entertainment. The company planned to create a successful K-pop group and achieved its goals.

The label was looking for group members all over South Korea. The representatives watched G-Dragon and Taeyang since the singers were 11 years old. T.O.P was invited by G-Dragon. They were friends since childhood. Seungri caught the label’s attention after his work on the TV project Let's Cokeplay: Mnet Battle Shinhwa. Two friends Daesung и Hyun-Seung attended the audition, but only the former passed. After Daesung accepted the offer, the lineup was finalized.

In 2006, the group debuted with a live performance on Olympic Gymnastics Arena in Seoul. The same year, the artists presented a debut LP, Bigbang Vol.1. It featured such popular songs as "BIGBANG /We Belong Together", "B I G B A N G 03", and "Bigbang is V.I.P/La La La". The album reached the 3rd spot of the South Korean chart and sold 157,000 copies. After the release, many organizers tried to book Big Bang for private events. The group rarely agreed.

In 2007, the artists presented two EPs, produced by YG Entertainment. Neither Always nor Hot Issue made it into the charts.

In 2008, Big Bang recorded Number 1. The album was aimed at the Japanese audience. The majority of the songs were recorded in English. Tracks "With U", "Baby Baby", "How Gee", "So Beautiful", and "Remember" became hits. Soon, the artists released a South Korean version of the LP and called it Remember.

The group’s third EP, Stand Up, didn’t become as successful as the LPs. It featured six songs. The most popular one was “Day By Day”. The same year, the artists recorded two EPs for the Japanese audience. For the World and With U reached the 53rd and 45th spot on Japan Hot Albums Chart, which didn’t meet the label’s expectations.

In 2009, the group released one more LP, Big Bang. The album achieved impressive popularity in Japan, reaching the third spot on the national chart. The singles "Gara Gara Go!", "My Heaven", and "Bringing You Love" became hits. In 2011, Big Bang presented a new LP, Big Bang 2. Tracks "Koe o Kikasete", "Tonight", "Beautiful Hangover", and "Tell Me Goodbye" became successful. The LP topped Japan Oricon Albums Chart. The same year, the band released the next EP, Tonight, which made it into the top 10 of the Korean and Thai charts.

In 2012, the group released the LP, Alive. It featured 9 songs for Digital Album Edition and 12 songs for Monster Addition. The most successful tracks were "Fantastic Baby", "Ain't No Fun", "Blue", and "Love Dust". The album was released for the Japanese audience, which appreciated the effort and put it on the third spot of the national chart.

The same year, Big Bang released an EP with the same name as the latest LP. For the first time in the group’s history, it managed to conquer American charts. The album reached the 4th spot on Top Heatseekers and US World Albums Charts. It also edged its way into Billboard 200 and settled on the 150th spot.

In 2016, the group released two albums, Made Series (for Japan) and Made (for South Korea). The following songs became popular, "Loser", "Bang Bang Bang", "Bae Bae", "Sober", "If You". They reached high spots on the charts. The album itself became one of the most successful LPs recorded by the band.

To abide by the South Korean law, all young men must serve in the military. In March 2018, the group members released a farewell track “Flower Road”. The single set a record selling 3 million copies in China in just 3 hours after the release. It also topped Billboard’s World Digital Songs Chart.

The fans are eagerly waiting for the group’s military service to be over. On average, it lasts about 22 months.