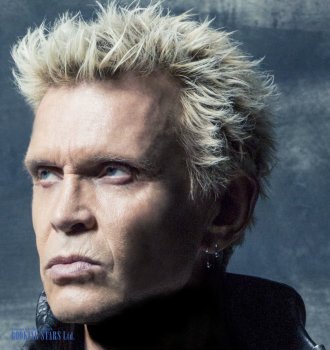 Billy Idol is a rock-singer from Great Britain, who is famous for his unique style and unusual approach. He started his music career when he was a student and got involved into punk.

Billy Idol took part in two bands - "Chelsea" and "Generation X", but then decided to become solo. The most famous and popular songs of Billy Idol are "WhiteWedding", Eyes without a face, "Rebel Yell", Flesh for Fantasy".

There is an interesting story about his nickname - he decided to choose "Idol", because one day a school teacher wrote at his school diary that he was an "idle". Billy came to a conclusion that this word is in tune with "Idol".

One day, a chemistry teacher wrote in Billy Broad's school diary a remark: William is idle (from the English. "William is an idler"). In the 1980s, the "lazy man" showed himself to be an incredibly efficient musician, ready to do anything for the sake of success. Thus was born Billy Idol - punk star, MTV favorite, author of hits like Rebel Yell and Dancing with Myself.

The biography of William Michael Albert Broad, who later called himself Billy Idol, began on November 30, 1955, in a family of ardent Anglicans in Stanmore, Middlesex, UK.

As soon as Billy Idol was 2 years old, he had to move to Long Island, New York. He liked the life of an American: freedom flourished in the country, and Elvis Presley was the No. 1 man. But at the age of 7 I had to return to gloomy Great Britain.

Peers disliked Billy Idol, called him "Yankees", teased him for his frivolous American accent. He became an outcast, an outsider. Experienced grievances and vain accusations were so deeply embedded in the head that Billy Idol, even after becoming famous, continued to be a freak.

After school, Billy Idol had a modest choice - either to work for his father, or to continue his studies. In October 1975, he entered the University of Sussex in the linguistics department, but withdrew the papers after a semester. The musician hated the idea of ​​living according to a typical scenario: school - university - work - family - old age. He strove to create, but could not find his sphere.

The music of The Sex Pistols, which Billy Idol fell in love with in 1976, helped. Under her influence, he joined the punk band Chelsea as a guitarist and then formed Generation X.

Generation X was one of the first punk bands to appear on the BBC's Top of the Pops music program. Unlike the then dominant Clash and The Sex Pistols, Billy Idol's gang was inspired by the music of the mid-1960s - Elvis Presley, The Beatles and The Rolling Stones.

“Other punks lied to themselves if they thought the Beatles and The Rollings had brought nothing to the music. Yes, all the artists of the 1970s and 1980s were brought up on Drive My Car and Paint It, Black! " - later said Billy Idol.
Generation X released 3 albums and disbanded in 1981. From that moment, Billy Idol's solo career began.

In his youth, Billy Idol was not distinguished by decency and docile nature. His life twice hung in the balance due to drug overdose, he drank a lot, did not avoid "one-off" relationships, and then was treated for sexually transmitted diseases. The "naturalness" of his orientation was never questioned, despite his pretty appearance.

In 1989, the musician was deported from Thailand for looting rooms in three hotels. The damage was estimated at $ 20 thousand. However, later the lifelong ban on Billy Idol's entry into the country had to be lifted: the Thai people adored his music.

Billy Idol's attitude to the experience is determined by his quote: “If you think carefully, it becomes clear that you cannot escape from old habits and lifestyle. In a sense, I will forever remain a drug addict, alcoholic and sex maniac. "

However, sometimes there was stability in Billy Idol's personal life. In 1980-1989, he met with the dancer Perry Lister.

Once the lovers had a serious fight and parted. The loss was not easy for Billy Idol, but thanks to the experienced emotions, the album Whiplash Smile was born, full of touching ballads like Sweet Sixteen. June 15, 1988 Perry Lister gave birth to the musician's son, he was named Willem.