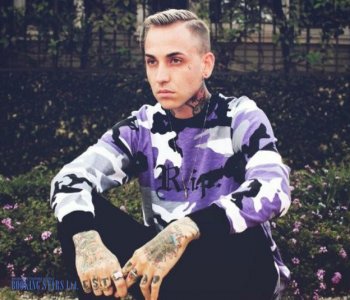 Matthew studied at the most ordinary school, early felt a craving for music and decided to realize his own talent. He started playing in one of the Florida rock bands. This activity was successful, gave the guy pleasure. The members of the group managed to record several discs and demos. They were not particularly famous, but this activity helped Matthew to determine what he really wants from life. However, the group could not give him what he really wanted, so the guy decided to pursue a career as a solo music artist.

He didn't manage to start his career right away. The musician had to deal with writing lyrics for other, more popular performers for several years. However, Matthew was not discouraged. He understood that his time had not come yet.

He did not want to act as a member of any musical association anymore, but in 2010 he had to become a member of another rock group. They recorded several joint tracks, but the musician did not stay in this group either. He still dreamed of a solo career.

Only in 2015, the musician was able to start a full-fledged creative activity. He coined the pseudonym Blackbear back in 2010, when he realized that he needed some sonorous and memorable stage name.

The singer timed the release of his first music album to coincide with the holiday of All Lovers in 2015. The disc was named "Deadroses". It includes 10 full-length tracks recorded at a professional studio. It's hard to say which genre of music this album belongs to. Music critics are sure that the singer uses a mixture of different styles, but he does it very harmoniously.

A year later, he released another album, Dead. Its "highlight" was that there were several tracks from the first album on the disc, but in an acoustic version. There were also completely new musical compositions.

When the musician was 25 years old, he decided to time the release of the third album to coincide with his birthday. So the disc "Help" was released.

Matthew continues to write lyrics for other artists. He calls this activity his hobby, which brings him additional income. For example, Justin Bieber performs several songs of his authorship.

The guy is attracting more and more attention from fans, this army is increasing day by day. People are attracted by his unusual manner of performance.

Blackbear is actively involved in charity, more than once he donated large sums of money to people who have suffered from natural disasters.

He tells about himself that he is a very sociable person who can find a common language with any people. Many of his friends note that Matthew is the kind of person you want to look up to

In his school and teenage years, the artist did not have a girlfriend. Now he does not want to discuss the topic of his personal life, and also says that he simply does not have enough time for a relationship.

Thus, Blackbear became famous both as a singer with an extraordinary appearance and manner of performance, and as a songwriter that later became hits.