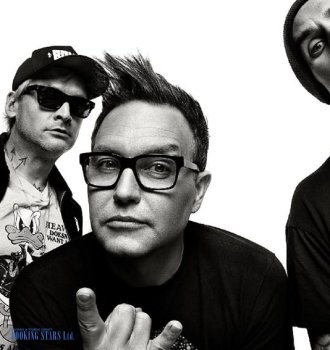 American punk rock band Blink-182 started gaining popularity thanks to its optimistic and humoristic lyrics, which were combined with rhythmic music and simple melodies. The band’s history goes back to the 1990s. Initially, the musicians called the group Duck Tape but then changed it to Blink. The numbers don’t mean anything. They were chosen randomly and had to be added because there was already an Irish band with the same name, which wanted to sue Blink after the release of the debut LP.

The group’s founder was Tom DeLonge. When he was a teenager, Tom was expelled from school for drinking alcoholic beverages at a basketball game. His parents sent DeLonge to another school, where he met Ann Hoppus. They became friends. The girl introduced Tom to Mark Hoppus.

Tom and Mark formed their own band and invited a drummer Scott Raynor, who was just 14 years old at the time. The three of them worked together until the end of the 1990s. At the peak of the band’s popularity, Raynor had to leave the band due to problems with alcohol. The musicians had to look for a new drummer. They soon found Travis Barker, who used to play with The Aquabats.

The band’s career took off when the artists created a demo album, Flyswatter. It was recorded at the drummer’s apartment. The recording had a bad quality, but the musicians still decided to make 50 copies and sent them to labels. The album got to the destination and brought the artists a contract with Cargo Music.

In 1995, the band released its first LP, Cheshire Cat, The album was recorded with Cargo Music and Grilled Cheese Records. After the release, many producers started noticing the group. Tom and his friends started getting offers from numerous labels. A year after the release, they signed a contract with MCA, which later turned into Geffen Records.

The second LP came out two years later, in 1997. The artists called it Dude Ranch. The album was commercially successful, earning platinum certification in the USA, Australia, and Canada. Singles “Josie” and “Dammit” became hits. Many organizers tried to book Blink-182 for private events, but they rarely agreed due to a tight schedule.

Two more years later, the artists presented a new LP, Enema of the State. The producer of the album was Jerry Finn, who used to work with such artists as Rancid and MxPx. The album featured such hits as "What’s My Age Again", "All the Small Things", and "Adam's Song". It earned a huge variety of platinum certifications, five of which came from RIAA (USA).

In 2001, Blink-182 released a new album, Take off Your Pants and Jacket, which earned positive reviews from fans and critics. After the release, the band went on a tour of Europe but had to cancel it due to 9/11 terrorists attacks. The concerts were rescheduled for next year but then canceled again due to Tom’s health problems.

The fifth album came out in 2003. It was called Blink-182. The LP featured such hits as "Feeling This", "Always", and "I Miss You". It reached high spots on the charts and sold seven million copies worldwide.

In 2005, even though the group was doing great, the musicians decided to go on a hiatus. The reason was Tom’s desire to spend more time with his family and take a break from endless concerts. At first, the artists wanted to take a 6-month break. But half a year later, DeLonge still didn’t want to come back. He quit the band without saying anything to his friends. The artist made a call to the manager and changed his phone number.

The remaining members of the group decided not to look for another guitar player and got busy with solo projects.

In 2010, the artists filmed a music video for their single “First Date”. It collected over 133 million views on YouTube. The band was planning to release a new LP the same year but didn’t manage to find sufficient time. The album, Neighborhoods, finally came out in 2011 in the USA and in 2012, in Europe.

In 2015, DeLonge decided to quit once again. But this time, the rest of the members made a decision to continue working and hired a new guitarist. It was Matt Skiba.

In 2016, Blink-182 released a new album, California. It immediately topped the charts. After the release, the musicians embarked on a long tour of the USA and Canada.

Today, the group is working on a new album. The name and the release date of the LP are currently unknown. One of the singles from the new album is already released. “Blame It On My Youth” reached the 19th spot on Hot Alternative Songs Chart. Meanwhile, the rumor has it that Tom DeLonge is planning to come back to the group.