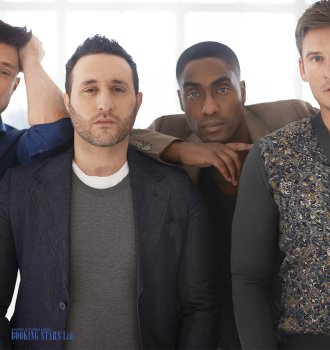 Blue is a popular British Eurodance and R&B boy band, which was established in 2000. The lineup includes Antony Costa, Duncan James, Simon Webbe, and Lee Ryan. The band is mostly popular for its singles “All Rise”, “Sorry Seems to Be the Hardest Word” (with Elton John), and “Too Close”. The band went on a break from 2005 until 2008. They are still performing today. The group recorded 5 successful albums and holds two BRIT awards.

In 2001, the band released their first single “All Rise”. It immediately became famous in the UK and all over Europe. The song reached the 4th spot on the UK single Chart, stayed there for four months, and topped the Official New Zealand Music Chart. It received 2 golden statuses and one platinum certification. The same year, the band released their second hit “Too Close”. The song topped the British Singles Chart and the Official New Zealand Music Chart. The third song the band released in 2001 was “If You Come Back”. The single wasn’t as popular as the previous two but it stilled topped the UK Singles chart and received silver certification.

In the end of 2001, the band released their debut album All Rise, which included the previously released hits. The album topped the UK Albums chart and got into top 10 of Belgian, New Zealand, and Irish charts.

In 2002, another single from All Rise “Fly By II” became a big hit in the UK and Europe. The same year the band went on a world tour. Upon returning, they released their second album, One Love. In December, the band recorded the single “Sorry Seems To Be The Hardest Word” together with Elton John. It became and international hit.

In 2003, the band released their third album Guilty. It topped the UK Album chart and received platinum status.

In 2005, the band went on a hiatus during which they participated in several music festivals.

In 2013, they took part in Eurovision with a new single “I can”, which got into the charts but was far from topping them. The same year they released their fourth album Roulette and in 2 years another album Colours. Both albums made it into the charts but were substantially less popular than the group’s past work.

How much does it cost to book Blue:
Price inquiry
Blue booking agent:
Contact agent
Blue Contacts:
Send Blue a message
« previous next »