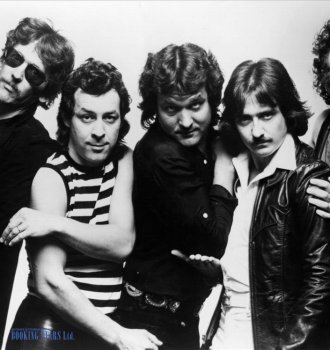 The rock band Blue Öyster Cult was formed in New York in 1967. The current lineup includes Eric Bloom, Buck Dharma, Richie Castellano, Danny Miranda, and Jules Radino. The band is mostly known for such songs as “(Don’t Fear) The Reaper”, “Burnin’ For You”, and “Shooting Shark”.

In its early career years, the band Blue Oyster Cult was popular for its “Black Sabbath” style riffs and mystic lyrics. They created a notion of intellectual heavy metal. Such interesting song names as “A Kiss Before The Redap" и "OD'd On Life Itself" created a certain strange half-occult and half-biker image, which was appealing to many listeners.

By 1968, the group had sufficient materials ready to create a debut album with Elektra Records. However, the release was delayed since one of the members left. That year, Eric Bloom, who used to be a sound producer, joined the band and the studio work continued.

Next year, the band put up a failing performance at Fillmore East Festival. Musicians decided to change the group’s name. It went from Soft White Underbelly to Oaxaca to Stalk-Forrest Group. With the new name, the artists started recording new songs. None of them seemed good enough for release until the band came up with "What Is Quicksand?"

However, fame still wasn’t forthcoming. So the musicians changed the name again. This time they came up with Santos Sisters. The final version of the group’s name as we know it today appeared in 1971. At about the same time a successful producer David Lucas noticed the band and invited it to a studio. Soon, musicians signed a contract with Columbia Records.

The debut LP came out in 1971. Blue Oyster Cult featured eight tracks recorded with the support from David Lucas and his studio. All group members worked on the lyrics. The album made it into Billboard 200 just barely. But it was an excellent start for the group, which spent such a long time trying to find its niche in the music world.

In 1971, Blue Oyster Cult presented a new LP, Tyranny and Mutation. It was recorded while the musicians were touring the world in support of the previous album. The LP featured such successful songs as "The Red and The Black", "Baby Ice Dog,” and "Hot Rails To Hell". It climbed to the 122nd spot of Billboard 200.

In 1974, musicians presented the third album, Secret Treaties. It earned numerous positive reviews from the critics and came in 53rd on Billboard 200. The album featured such hits as "Astronomy", "Career of Evil", and "Dominance and Submission". It earned a gold status from RIAA. At that time, many fans started trying to book Blue Oyster Cult for private events.

In 1976, the band presented its first live album, On Your Feet or on Your Knees, which became gold. Two years later, they recorded Agents of Fortune. The album quickly turned platinum. It featured a hit single "Don’t Fear the Reaper", which climbed to the 12th spot of Billboard Hot 100. The album also became popular in Sweden, Canada, and the UK.

In 1978, musicians recorded a new live album, Some Enchanted Evening. It reached the 44th spot on Billboard 200 and became platinum in the USA.

During the supporting tour for the new LP, Fire of Unknown Origin, Albert Bouchard left the band. For some time, musicians weren’t giving any concerts. They spent the next several years doing studio work.

In 1983, Blue Oyster Cult presented The Revolution by Night, which featured a hit single "Shooting Shark”. After the release, the artists asked Bouchard to rejoin the band. The drummer’s return led to numerous disagreements so the group stopped performing once again.

In 1987, the artists came back to the stage when they got an invitation to perform in Greece.

At the end of the 1990s, Blue Oyster Cult signed a contract with CMC Records and recorded two new albums, Heaven Forbid (1998) and Curse of the Hidden Mirror (2001). They didn’t get into any of the popular charts.

At the beginning of 2007, the band presented an extended version of the albums, Spectres and Some Enchanted Evening. In 2012, their songs became a part of a 17-disc collection called The Complete Columbia Albums Collection.

Even though the artists haven’t recorded any new studio albums since 2001, they have been touring the world with old hits. Blue Oyster Cult participates in music festivals and performs at private events.