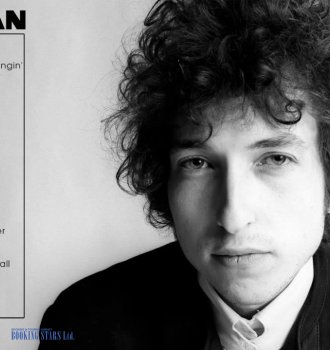 Bob Dylan was born on May 24, 1941, in Minnesota, USA. He is a singer, songwriter, author, and painter. He recorded 38 studio albums and 85 singles. Dylan’s most famous hits are “Blowin' in the Wind”,  “Like a Rolling Stone”, “Rainy Day Women”, and “On a Night Like This”. He holds numerous awards, including 11 Grammies and an Academy Award.

Bob Dylan (real name Robert Allen Zimmerman) taught himself how to play the guitar when he was still in school. Dylan wrote poetry since he was 10 years old. In high school, he joined various school bands and copied the famous rock stars.

In 1959, he enrolled at Minneapolis University and started performing at various cafes. Back then, his pseudonym was Bob Dillon. In the end of 1960’s, Dylan quit school and moved to New York, where he performed folk and blues at local nightclubs. In 1961, he was noticed by Columbia Records and signed a contract with them after changing the last name to Dylan.

In 1962, Bob released his first album Bob Dylan. He picked several classic ballads and blues songs for the LP. The album included just two of his own songs. However, his next album Freewheeling Bob Dylan (1963) was 100 % original and included one of his most popular songs “Blowin' in the Wind”. In just a few weeks it became an international hit thanks to the performance of Peter, Paul & Mary. 40 years later, The Rolling Stone magazine placed the song on the 14th spot of 500 greatest songs of all time list.

In 1974, Dylan released Planet Waves, which was the first LP to top the charts. The same success awaited Blood on the Tracks (1975) and Desire (1976). In 1979, Dylan released his first platinum album Slow Train Coming (1979), which brought him a Grammy Award.

In 1988, Dylan was inducted into Rock and Roll Hall of Game, together with Beatles.

The latest Dylan’s album to date Triplicate was released in 2017. It reached the 37th spot on Billboard 200 and 17th spot on UK Albums Chart.

Bob Dylan is also famous for his achievements in art and literature. He continues to work on his music career.