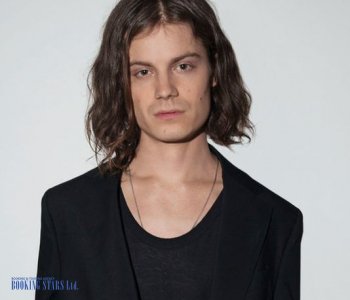 BØRNS - Garrett Borns is a rising star in American pop music. His debut album Dopamine, released in 2015 on the Interscope label, where Eminem and Marilyn Manson are registered, was praised by Prince and Taylor Swift, and Borns, who came to conquer Los Angeles from Michigan, hit the top ten from the first shot. Music critics see him as the successor to the glam rock stars who shocked audiences in the early 1970s with their rock-themed performances, dazzling outfits, and androgynous sexuality.

In the last video of Børns, a man dressed in a woman's dress with the habits of Greta Garbo, and a boy with blue hair depicting a big boss, and a strange girl with a dish of grapes, and an ensemble of Mexican guitarists appear, and, finally, the main character is a handsome young man Garrett Clark Borns ... He is dressed in a quirky red and white outfit that looks like a hybrid of tracksuit and Peruvian Indian clothing. She sings in a high, flowing voice and shakes her mane of long curly locks that any girl would envy.

“I grew up listening to the music of the 1970s,” the voice of a twenty-five-year-old musician gently sounds on the telephone. - Listened to all Mark Bolan, David Bowie, Roxy Music. Their music became a solid foundation for my first album. But I listen not only to retro. I have a lot of modern rap in my songs. It plays on Los Angeles radio, but I can't seem to learn to distinguish between the performers. "

Børns' surreal songs, featuring psychedelic, glam rock, electro-pop, and hip-hop traits, always fool assumptions about the ending. They are arranged like pictures-riddles of Maurits Escher - you can see in them both flying birds and swimming fish. And it seems logical when you find out that Borns began his career in show business as an illusionist. “When I was ten, I was at a birthday party where a magician, a gray-haired gentleman who pulled a rabbit out of his hat, was performing,” Garrett recalls. - Other children laughed and applauded, but I suddenly wanted to be in his place. I got hold of books on how to do magic tricks. Classic - card tricks, tricks with shawls and rings. I trained myself, came up with my own show and became a wizard named Garrett the Great. "

Parents supported their son in his venture: Borns's father, a graphic designer working in advertising, drew a logo for him, and the business began to spin. Garrett the Great performed his own show weekly at one of Michigan's restaurants and at children's parties. “Thanks to this work, I learned early on how to behave on stage and communicate with the audience. It went on for three years and was profitable, ”laughs Borns.

It may seem that Garrett is a freak who gathers around him the same unbridled eccentrics. But you shouldn't judge a book by its cover, and a musician by his videos and concerts. Behind the scenes, he is a modest, calm and reasonable young man who prefers to stay at home and cook his own dinner to crazy parties

Style is another matter. He is most comfortable in Gucci clothes. Over the past couple of years, the Californian musician has developed an excellent relationship with this famous brand. The Italian company provides him with brocade suits and trousers with stripes, and invites him to the front row for collection shows.

Exciting fantasies, confusing masculine and feminine images is not a moral position, but an aesthetic one, largely due to stylist Kat Tipaldos, who has worked with MGMT and Alicia Keys. “She has an incredible imagination, she is constantly discovering something new in fashion for me, - says the young man. - Sometimes she offers absolutely crazy things, which are not even clear how to wear. But extravagant clothing reveals personality traits in a person that he himself did not notice in himself. And you start to feel differently, do things that you haven't done before, and behave differently. You open up a new world in yourself. "

“Being a musician is the same as being a wizard,” Borns tells me goodbye. "A great song is always a great trick."