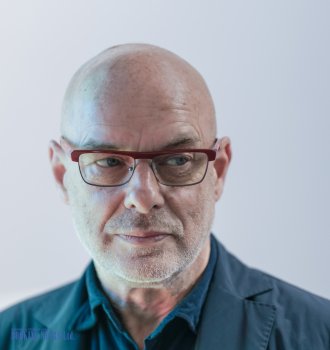 Brian Eno’s full name is Brian Peter George Eno. He was born on 15 May 1948 in a small British town of Woodridge. His Catholic parents sent the boy to study in St. Joseph’s College. Back then, it belonged to the order of Catholic brothers. Eno went on to study in Winchester School of Art, from which he graduated in 1968. Later Brain told reporters that the choice of college turned out to be very useful for his career.

In this school, Brian didn’t just learn how to draw, he was taught new ways to find personal fulfillment. It helped the young man, who was dreaming to become a celebrity. At the time of his studies, Cornelius Cardew visited the school and got Eno interested in non-academic music.

At that time, music experiments were becoming very popular. Musicians were playing around with styles and electronic music elements. Eno’s teachers, who had big hopes for the young and talented musician, tried to tell him to avoid the new genres, which seemed to be lacking prospects at the time. However, Eno didn’t listen. Together with his college friend Anthony Grafton, he created a band Maxwell Demon. The only song, which gained at least some popularity, was “Ellis B. Compton Blues”.

In the 1970’s the musician worked on his solo career. He recorded several albums, including Here Come the Warm Jets, Another Green World, Before and After Science, Taking Tiger Mountain (By Strategy), Ambient 1: Music for Airports, Discreet Music, and Music for Films. The debut LP Here Come the Warm Jets (1974) climbed to the 26th spot of UK Albums Chart and even made its way into Billboard 200. The artist also worked with other musicians. Brian collaborated with Robert Fripp when he was recording No Pussyfooting, Evening Star, and Air Structures. He helped David Bowie record his album Low in 1977.

In 1978, Brian released Ambient 1: Music for Airports. It wasn’t just a new LP. The album was highly important for the development of a new music style called ambient. Brian Eno is considered to be the founder of the style. The album topped the chart The 25 Most Influential Ambient Albums Of All Time. At that time, many organizers tried to book Brian Eno for their events.

The next decade was busy for the man, who brought ambient to the world. He recorded such albums as Music for films III, Ambient 2: The Plateaux of Mirror, Ambient 3: Day of Radiance, Ambient 4: On Land, Apollo: Atmospheres and Soundtracks, and Thursday Afternoon. He continued working with other musicians. Among them were John Hassel, U2, Michael Brook, David Byrne, and others.

Eno continued working hard in his music in the 1990’s. He recorded several albums, including Nerve Net, Neroli, The Shutov Assembly, The Drop. The latter settled on the 17th spot on US New Age Chart.

In the 2000’s, Brian released several solo more albums and continued collaborating with other musicians. The LP Another Day on Earth (2005) reached the 75th spot on UK Albums Chart. Eno also worked on several albums with David Byrne and Robert Flipp.

It’s worth noting that solo albums, which Eno released in the 2010’s were much more successful on the popular charts than his previous work. Brian continues working on new songs and performs live.