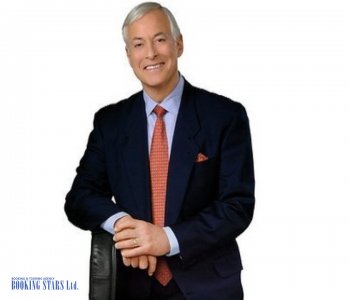 Brian Tracy is a true motivational speaker. He can both educate and inspire his audience, helping them to see their potential more clearly and to aim for the best they can achieve. His personable and calm way of addressing listeners helps his message to be readily absorbed.

Brian Tracy was born in Charlottetown, the capital city of Prince Edward Island, Canada, on the 5th January 1944. Despite being a capable young person, Tracy did not complete high school and opted to work instead. For eight years he worked aboard a tramp steamer, travelling around the globe and gaining knowledge of work, trade and multiple lands and cultures.

In Canada, Tracy found a job as a salesman. He was initially unskilled and unsuccessful in this role and was only too aware that his performance needed to improve quickly. He began discussing sales with more experienced colleagues and soon learned the tricks of his trade. After listening to and following the advice of others, he began to work well and after a year was his employers top salesman. A year later he became vice president of the company, quite a feat for a 25 year old!

Having been inspired by his experience of how established team members can educate newcomers, becoming an educator of others was a natural progression for Tracy. He began holding The Phoenix Seminar in 1981 in order to motivate others. He later updated the content of The Pheonix and renamed it The Psychology of Achievement, going on to release it on cassette as a self-help guide; it has now been translated into over 20 languages. Tracy has gone on to record numerous audio and video resources to assist businesses and individuals with motivation and learning.

Tracy has written numerous self-help books during his career, including the iconic Maximum Achievement: Strategies and Skills That Will Unlock Your Hidden Powers to Succeed, which has been recognised as a motivational classic. An enthusiastic author, he has written more than 45 books in total, many of which have been translated into multiple different languages.

To date, Tracy is estimated to have held more than 4,000 seminars across the world, helping motivate over a thousand businesses and many thousands of individual employees.

Keeping up with modern trends, Tracy has set up his own online course for business owners and salespeople. The Brian Tracy University aims to educate and provide inspiration. In 2008, Tracy was involved in setting up another online resource named iLearningGlobal.

Tracy is married to Barbara and the couple have two daughters named Christina and Catherine and two sons named Michael and David.

In 2010, Tracy was diagnosed with stage three throat cancer. In order to help himself and others suffering adversity, he recorded the stages of his treatment and experience of the illness on video. This video has helped many of its viewers, just as Tracy wanted. He is now free of cancer.

Tracy is a board member of the Heritage Foundation, a think-tank which addresses issues concerning the continuation of the USAs founding principles into the modern age.