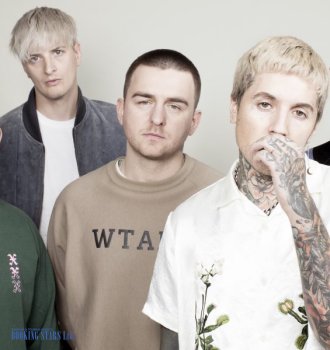 British rock group Bring Me the Horizon was formed in March 2004 in Sheffield. The initial lineup featured guitarist Lee Malia, bass guitarist Matt Kean, vocalist Oliver Sykes, drummer Matt Nicholls, and another guitarist Curtis Ward. At that moment, none of the members was older than 17. They came up with the name for the group after watching Pirates of the Caribbean. It was one of Jack Sparrow’s phrases.

After rehearsing for several months, the artists recorded a demo album, Bedroom Sessions. In September 2004, the local label Thirty Days and Night helped the group release its first EP, This Is What the Edge of Your Seat Was Made For. The alternative music magazine ABM called it the “Most Brootal E.P. of The Year”. In January 2005, the EP was re-released by the British label Visible Noise, which brought the group popularity.

After the EP came out, the band gave many concerts. At the beginning of 2006, Bring Me the Horizon started working on its first LP, Count Your Blessings. It officially came out in October. Music critics gave it many negative reviews. However, the album managed to reach the 9 th spot in UK Rock & Metal Albums Chart and settled on the 98 th position in the UK Albums Chart. In November, the group went to tour the UK. In 2007, it started giving concerts in Europe. The fans tried hard to book Bring Me The Horizon for private events.

While touring, Bring Me the Horizon noted a negative reaction of hard rock fans. That’s why while recording their next LP, the artists tried to leave deathcore behind and switch to metalcore. The new album, Suicide Season, came out in September 2008. This time, the critics had mixed reactions to the LP. It reached the 18 th spot of US Top Alternative Albums Chart and came in 47 th on the UK Albums Chart, which was an improvement.

In March 2009, while performing on the tour Taste of Chaos, the guitar player Curtis Ward made a decision to leave the band due to a hearing problem. Jona Weinhofen took his place. He used to play with the California band Bleeding Through. In November 2009, Bring Me The Horizon created a remix version of their second LP, Suicide Season Cut Up! It came in third on UK Independent Album Breakers Chart and settled on the 8 th spot of the UK Dance Albums Chart.

In November 2010, the band presented its third LP with a long title, There Is a Hell, Believe Me I've Seen It. There Is a Heaven, Let's Keep It a Secret. While recording the album, the musicians added symphonic and electronic music elements and choral vocals. Critics gave mostly positive reviews to the album, noting changes in the direction lyrics were taking. In the UK, the album topped numerous charts and came in 2 nd on US Rock Album, US Hard Rock Albums, and US Independent Albums Charts.

The group spent the next year working with other hard rock bands in Europe and the USA. In December, together with a British electronic music producer Draper, they recorded a remix album, Chill Out Sessions. It came out in November 2012.

In 2012, the band focused on recording a new LP. The lineup suffered several changes. Weinhofen left the group. Jordan Fish joined it.

In April 2013, Bring Me The Horizon presented its fourth LP, Sempiternal, which featured metalcore mixed with different electronic music styles. It came in third on the UK Albums Chart and reached the 11 th spot of Billboard 200. In 2014, the group toured the USA as part of American Dream Tour.

In September 2015, the artists presented a new LP, That's the Spirit. In it, they focused on electronic rock rather than metalcore. It reached the 2 nd spot on the UK Albums Chart and Billboard 200. In 2015 and 2016, the band toured Europe, USA, and Australia.

In January 2019, Bring Me The Horizon released a new electronic rock album, Amo. It topped the UK Albums Chart and came in 14 th on Billboard 200.

Book Bring Me The Horizon