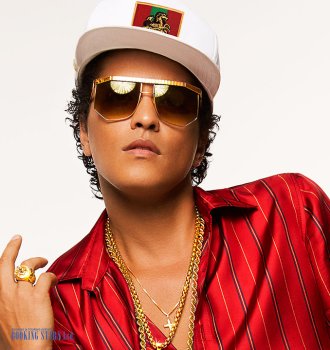 Bruno Mars (real name Peter Gene Hernandez) was born on October 8, 1985, in Honolulu. This American singer, songwriter, actor, and producer is mostly known for his songs “Just The Way You Are” and “Grenade”. Mars holds numerous awards, including 5 Grammies and 3 BRIT awards.

Peter Hernandez was born in a family of musicians. He started performing when he was just 4 years old. In 1990, MidWeek magazine called him “Little Elvis”. Two years later, he landed a role of young Presley in Honeymoon in Vegas.

After finishing high school, Mars decided to move to Los Angeles and dedicate himself to the music career. In 2004, he signed a contract with Motown Records. The deal didn’t produce any hits. The only thing that partnership brought Mars was the friendship with Philip Lawrence, who also worked for the label.

In 2006, Mars signed a contract with Atlantic Records. But it took him 4 more years to actually start his solo music career. Before that, he was writing songs for other artists, including Sugarbabes, Sean Kingston, Alexandra Burke, and more. Mars was finally noticed when he worked with Far East Movement on their album Animal.

In 2009, Mars and B.o.b recorded “Nothin’ On You”. The same year Travis McCoy featured Bruno Mars in his song “Billionaire”. Bruno Mars was also one of the cowriters of Cee Lo Green’s song “Fuck you!”

In 2010, Bruno finally released his debut album Doo-Wops & Hooligans. It sold over 6 million copies worldwide and received several platinum certifications. A single from that album “Just The Way You Are” topped Billboard Hog 100 and got the singer his first Grammy Award. Two more singles from that album “Grenade” and “The Lazy Songs” earned huge popularity as well.

In 2016, Mars released his third album 24K Magic. It was just as popular as the previous two LPs. It already received 3 platinum certifications and more are coming. Bruno continues to record and perform international hits.