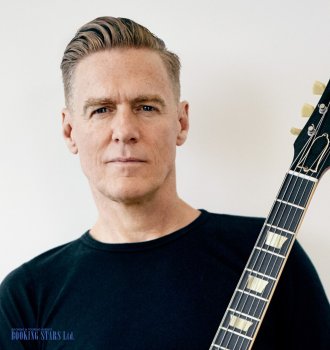 Bryan Adams was born on November 5th, 1959 in Kingston, Canada. This Canadian singer, songwriter, and record producer became one of the top performers of the end of the 20th century. He is mostly famous for his songs “(Everything I Do) I do It for You”, “Please Forgive Me”, “All For Love”, and “Have You Ever Really Loved a Woman”. Adams hold numerous music awards, including Juno, American Music, and MTV.

When Bryan was 16 years old, he was already a good piano player and arranged small concerts in his own garage. Soon, he established a group called Sweeney Todd. In the beginning of his career, Bryan mostly performed with semi-professional bands. This helped him make useful acquaintances. During those years, he met Jim Vallance and they wrote a hit song “Let Me Take you Dancing”, which reached 90th spot on Canadian singles chart. Bryan and Jim wrote songs and sold them to famous performers, such as Joe Cocker, KISS, and Bonnie Tyler.

In 1978, Brian convinced A&M producers to sign a contract with him. He released his debut album Bryan Adams, which got into the charts but didn’t become a hit. The next album You Want it You Got It was slightly successful and eventually received golden status.

In 1983, together with a new producer Bruce Allen, Adams recorded his third album Cuts Like a Knife, which was a success. It reached the 8th spot of Canadian music chart and the same spot on Billboard 200.

All following albums recorded by Brian Adams just reinforced his success. In 1984, he recorded his fourth album Reckless, which finally topped the Canadian album chart and US Billboard 200. It received 5 platinum certifications and brought Adams a Grammy nomination.

In 1987, Adams released his 4th successful album Into The Fire that sold millions of copies. After the release, Brian went on a world tour. After the tour, he took a break during which he wrote a song for a movie, Pink Cadillac, which was performed by Celine Dion.

Brian and Jim Vallance worked together for 12 years. Then Adams continued working with producer Robert “Mutt” Lang. Adams went on to write hit songs and work on music for various movies. His songs were included in 42 films. In 2011, Adams was inducted into the Hollywood walk of fame. Adams continues to record new songs and tour the world with live concerts.