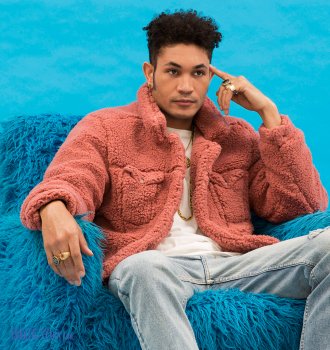 Bryce Vine’s real name is Bryce Ross-Johnson. He was born on 16 June 1988 in New York. When he was young, Bryce’s family didn’t have too much money. However, when his mother landed a role in a soap opera, Passions, the family’s financial situation improved, and they moved to Los Angeles suburbs.

Bryce often spent time on his mom’s film sets. That’s where he discovered his love for music. When Vine was a teenager, his father introduced him to R&B hits of the 1990’s. His mother noticed the boy’s talent, bought him a guitar and paid for lessons. Bryce enjoyed playing guitar and tried to hone his skills every free moment he had. At 13, the young artist began writing lyrics.

Bryce’s music career began in 2011 when he participated in the music contest The Glee Project. His mom insisted that he entered. Vine made it to the finals together with 11 participants but was the first one to drop out. Later Bryce remembered that contest with fondness. He said he got irreplaceable experience, which helped him choose his career.

After the project, the artist decided to get a musical education. He was accepted to the prestigious Berklee College of Music. As it turned out, the young man made the right decision. In college, he met his future producer Nolan Lambroza. Lambroza helped Bryce sign a contract with his own label Kiva House Lambroza.

Such artists as Third Eye Blind and J. Cole inspired Bryce. He insisted that the lyrics must be straightforward an easy to understand for an average listener while being clear and have a deeper meaning.

Between 2011 and 2014, Bryce was working on his new songs. In April 2014, he released the debut EP, Lazy Fair. The name for the album came from the name of his parent’s boat, which got its name from a French play. The album featured such hits as "Sour Patch Kids" и "Guilty Pleasure", "Where the Wild Things Are", and "Take Me Home". They didn’t make it into the charts. However, the music videos for the songs collected millions of views on the Internet. It was a big success for the young artist.

In 2015, the singer recorded “Thug Song”, which had several autobiographical elements. However, the critics didn’t give it good reviews.

In 2016, Vine officially released his second EP, Night Circus. It featured such popular songs as “Private School”, “Street Punks On A Freight Train”, and “Glamorama”. The same year he released two non-album singles, "Sunflower Seeds and "The Fall". Neither of them became hits but made the artist popular at the local level. At that time, many clubs tried to book Bryce Vine, and he rarely refused.

In 2016, Vine worked together with Zak Downtown and The Johnsons to record their hits “Cool Off” and “JUICE”.

In 2017, he recorded “Drew Barrymore”, which became the artist’s first single to make it into the charts. It reached the 46th spot on Billboard Hot 100 and the 19th spot on Mainstream Top 40. Some critics called this single “breakthrough of the year”. The same year Bryce worked with Crankdat to record “Dollars”.

Bryce often said that he is planning to release an LP. However, the name and the release date of the album are still unknown. Some say that the announced EP Carnival may turn into an LP with time.