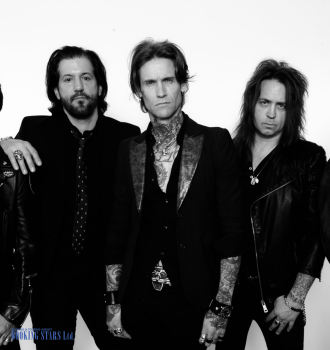 The rock band Buckcherry was formed in 1995, in California. The current lineup includes Josh Todd, Stevie D., and Kelly LeMieux. The band is mostly famous for such hits as “Sorry”, “Crazy Bitch”, and “Lit Up”.

Some people call the music created by this rock band worthy of the best hard rock traditions of 1980’s. In 1995, vocalist Josh Todd and guitarist Keith Nelson met at a tattoo salon and decided to form a group. They started recording songs heavily influenced by such celebrities as AC/DC, Metallica, Iggy Pop, Smoky Robinson, Kiss, and the like. After a while, the duo was joined by Devon Glenn and Johnathan Brightman. Initially, they members called their group Sparrows. Then decided to change it in order not to be confused with a recording studio Sparrow Records. The group was renamed “Buck cherry” and then “Buckcherry”.

Buckcherry quickly became popular among the local Los Angeles fans. Their first single “Lit up” contained controversial lyrics, such as “I love cocaine”. It became one of the most favorite songs on American radio stations at the time. At their concerts, Buckcherry was popular thanks to their image. The biggest hit was their vocalist, who thanks to the various tattoos, reminded people of Mick Jagger and Iggy Pop.

In 1999, the group signed a contract with Dreamwork Records and released their debut album Buckcherry. The LP reached the 74th spot on Billboard 200 and was certified golden in the USA. The same year Buckcherry performed an opening act for Kiss on their European tour. The group got many invitations from various TV channels. They participated in creating soundtracks for such movies as Road Trip and Mission Impossible 2.

In 2001, the group released their second album Time Bomb, which was less successful than the first one. Group members were disappointed and Jonathan Brighton left. In 2002, Devon Glenn and Josh Todd decided to pursue solo careers and the group fell apart.

In 2005, they got back together with a new lineup. A year later, they released another album 15, which was one of their most successful LPs. It got certified platinum in the USA and Canada.

The group released 4 more albums, including the latest one to date Rock’n’Roll (2015), which reached the 6th spot on the US Indie chart. The band continues to perform live.
Book Buckcherry