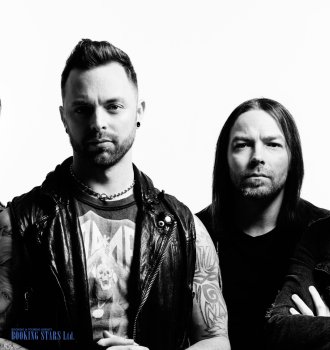 There is no doubt that diehard fans of metalcor and heavy metal have ever heard about Bullet for my Valentine (BFMV or B4MV). The group appeared in 1998 and they composed covers for such bands as "Metallica" and "Nirvana". However, within a short period of time they presented their own songs.  Their first album "The poison" was released seven years after the beginning of their music career.

It was launched on the 14th of February due to the name of the band.  Three years later the second album called "Scream aim fire" was launched, and it was a commercial success. 53,000 copies of it were Sold during the first week after its release. "Scream aim fire" was the fourth on Billboard 200 music chart. The next album of "Bullet for my Valentine" under the name "Fever" hit No.3 on Billboard 200, and also got a gold status.

The year before they had a great world tour, so the participants of the band need to relax. They are going to refresh and start again in 2018.

Book Bullet for my Valentine