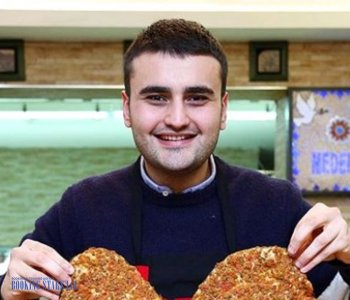 Burak Ozdemir, or CZN Burak, as he is known on social media, is a restaurateur and chef based in Turkey. The chef went viral when one of his videos, where the chef was making a giant-sized kebab, was reposted by 9GAG.

The chef is best known for making gigantic-sized portions of Turkish and Middle Eastern foods as well as everyday foods like burgers and hot dogs. While he cooks, the chef has a giant grin on his face the whole time and stares directly at the camera.
Career
Burak Ozdemir, known on social media as CZN Burak, was born on March 24, 1994 in the Hatay province of Turkey. The chef is of Syrian-Arab descent.

The Turkish chef owns the Hatay Medeniyetler Sofrasi chain of restaurants in Turkey, which have three branches: Taksim (in Istanbul), Aksaray (in Istanbul) and Etiler (in Istanbul). His restaurants offer traditional Turkish food and Middle Eastern food.

Burak first became popular on social media by posting videos of him cooking Turkish and Syrian food and gazing directly at the camera with a huge smile. He likes to make huge portions of his food, from traditional food to pizzas to burgers and beyond.

The techniques he uses to cook also helped make him famous: he chops his food quickly and rolls dough quickly. He uses giant-sized utensils to work with his food as well, from giant knives to giant spoons.

The chef first went viral when a video of him cooking a jumbo-sized kebab was posted on the account 9GAG.

Since then, CZN Burak has been a popular social media star across all his platforms. He works with a variety of ingredients. One of his most popular videos include him baking and cooking an entire ostrich. On his YouTube, TikTok and Instagram pages, he will share videos of him making giant-sized food portions of all cuisines.

Since becoming famous, the chef has had a number of celebrities visit his restaurant, including YouTube star Atta Halilintar while on vacation in Turkey, singer Virgoun and stars Verrell Bramasta, Rizky Nazar and Bryan Domani.

In addition, the soccer player Mesut Ozil, the King Tamim of Qatar and the Turkish President Erdogan stopped by the restaurant to meet the chef and try his food.