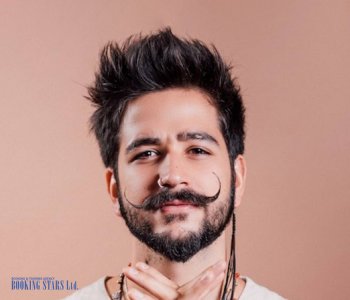 Camilo - Camilo Echeverri Correa, better known as Camilo, is a Colombian singer and songwriter who became famous after participating in the national X Factor competition.

Camilo was a welcome child - a blessing, as his mother calls him. From an early age he was fond of music. “I grabbed the guitar and imitated the famous tunes,” Camilo says of himself at the age of three. In addition to his passion for music, he was always interested in architecture and graduated from his specialty in Monteria, where he lived from the age of five.

In 2006, together with his sister Manuela, he participated in the selection of the national show X Factor, but they could not reach the final. One year later, Camilo's life changed.

The musician became famous with his repeated participation in the X-factor program in 2007. This time, Camilo won and gained popularity. The main prize was the recording of a solo album. "Reglame tu Corazn" ("Give me your heart"), Camilo's first full-length release, came out in 2008. The album fell in love with listeners and collected many downloads on the Internet.

In the same year, Camilo tried himself as the host of the children's program "Bugs", but in 2009 he left it due to a large-scale tour of the country and concerts in the USA.

In 2010, he announced that he would release a new album entitled Trfico de Sentimientos (Movement of the Senses) and presented a new release in September. With this album, Camilo returned to the world of music after being away for a year. The CD was not only successful in Colombia, but also in Peru and other Latin American countries.

After winning the X Factor, Camilo returned to the show once again - as a presenter in the qualifying stages. Camilo's natural sensitivity and identical experience helped support the contestants before performing.

In an interview with Digital Media, Camilo stated that he will no longer participate in the competition shows, as he believes that he will not surpass his victory in the X Factor. The singer decided to focus on his solo career. “Being a successful artist is difficult, but diligence will definitely pay off.”

Camilo continues to record successful hits. The solo song "La Tribu" was released this year, gaining more than 50 million views on YouTube in just a couple of weeks.

Camilo had a romantic relationship with law student Laura Daniela Guzman for a couple of years. In 2015, he met singer Evaluna Montaner, daughter of the famous artist Ricardo Montanero. Feelings flared up between the two artists and in 2018 the couple entered into legal marriage.

The couple are active on social networks and regularly share joint photos with subscribers. They frankly talked about their plans to get married and have children, delighting fans with the depth of feelings.

The love story was not without a small scandal. In 2018, Camila and Evaluna recorded a cover of the song "Criminal" by the singer Ozun, because of which they were condemned by believers: "Christians do not perform reggaeton."

“I hold on to the bizarre idea that love can change the world. Loving is cooler than being cool ”- wrote Camilo in one of the last tweets.

In 2010 he created a YouTube channel where he uploads covers of famous songs and videos from everyday life.

In an interview with Universal, Camilo said he was inspired by the Uruguayan singer Jorge Drexler. “I dream of recording a duet with him,” the musician added.

The song "Medialuna" is permeated with the musician's emotional experiences. During her recording, Camilo learned about the terrible diagnosis that the doctors gave to his father. Fortunately, the research turned out to be flawed: instead of cancer, the father had pneumonia.