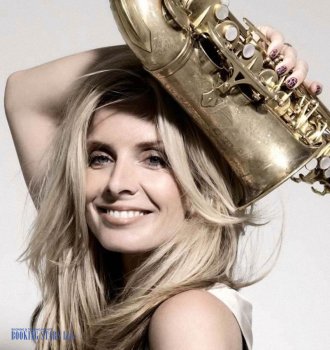 Candy Dulfer was born on September 19th, 1969, in Amsterdam. She is well known for her saxophone playing talents and occasional singing. Dulfer released 11 studio albums and received a Grammy nomination.

Candy started playing saxophone when she was just six years old. A year later, she became a member of a local Dutch group Jeugd Doet Leven. It should be noted that with the exception of a couple music lessons, Candy studied everything on her own.

In 1984, Dulfer established her own band Funky Stuff. 3 years later the band performed at the opening of Madonna’s concerts in Europe. The band was giving concerts all over Netherlands and most of the time the tickets were sold out.

In 1988, Funky Stuff performed at Prince’s concert in Netherlands. Candy was part of Prince’s music video and was even mentioned in one of his songs.

In the late 1980’s, Candy worked with a guitarist and producer of Eurythmics Dave Stewart. Together with him, Dulfer wrote one of her most famous songs “Lily Was Here”. The single got to the 6th spot on the UK singles chart and topped Dutch music chart.

In 1990, Dulfer played with Pink Floyd and released her first album Saxuality, which was nominated for a Grammy award. Soon her popularity reached the USA and she became one of the most famous jazz artists in the country. Her most popular songs were “For The Love of You” and “I Can’t Make You Love Me”.

In 2001, Dulfer released a duet album Dulfer Dulfer, which she worked on with her father.

In 2007, Candy released her ninth studio album Candy Store, which reached the second spot on the US Contemporary Jazz chart and got to the 32nd place on the Dutch music chart. The same year she became a host of her own show Candy meets…”.

From violinists and cellists and to professional piano and saxophone players, the number of instrumentalists available for hire for your upcoming event is overwhelming. All you need is to find the right one. As a booking agency with experience, we are always ready to offer you a variety of options for any type of celebration. Our live music agents know how to make your event truly unforgettable.

When To Book an Instrumentalist

The best part about instrumental music is that it can suit any occasion. We have been booking music artists for many years. That’s why we know how an instrumentalist can liven up the event. We get the fieriest reviews from clients, who take advantage of our entertainment booking experience. Especially, when it comes to instrumentalists.

How To Make Booking Music Easier

Booking talent always comes with many nuances, which our agents for music know how to work with. You don’t have to worry about searching, negotiating, and coordinating. We do all of the above and much more. Just give us a call, list your preferences, and we’ll do the rest. At Booking Stars Ltd., you are likely to find music managers you have been looking for. We strive to achieve 100% client satisfaction regardless of the project’s complexity.