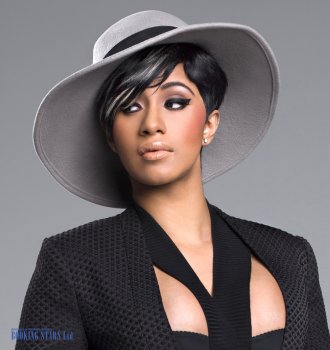 Belcalis Almanzar was born on 11 October 1992 in Bronx, New York. She has Dominican and Trinidadian roots. Belcalis went to Renaissance High School For Musical Theater & Technology but didn’t finish it. When she turned 19, she started working as a stripper in a local nightclub.  This job allowed the young woman to pay for school and avoid poverty. In 2013, Cardi B started earning popularity thanks to posting several videos on social networks. She had a popular Instagram page. In 2015, Cardi B debuted on television in the sixth season of reality show Love & Hip Hop: New York. She became the show’s new leading star. During the 6th and 7th seasons, the fans were watching Cardi B gain popularity and sort out the fiery relationship with her boyfriend. In the end of 2015, Cardi finally made her debut in the music industry. Together with a Jamaican singer Popcaan, she recorded a reggae mix to Shaggy’s single "Boom Boom". A month later, she released a debut video based on the song "Cheap Ass Weave". This song was a remake of Lady Leshurr’s "Queen's Speech 4." In March 2016, Cardi finally released her first full-fledged project, which consisted of 13 tracks. She called the mixtape Gangsta Bitch Music, Vol. 1.

In winter 2016, after spending two seasons on the show Love & Hip Hop: New York, Cardi bid her farewells and moved on to a solo music career. Her work on the show helped the singer get impressive recognition. She was often offered a chance to sing at private events and birthday parties. In January 2017, Cardi B released her second mixtape Gangsta Bitch Music, Vol. 2. A month later, she participated in New York Fashion Week, collaborating with such brands a MAC Cosmetics. At the end of the month, the singer signed her first music contract with Atlantic Records. In May 2017, Cardi B was nominated for BET Awards as "Best New Artist" and "Best Female Hip-Hop Artist". A month later, Atlantic Records released Cardi’s first commercial single "Bodak Yellow". After the release, she sang it at The Wendy Williams Show, where Williams asked how she came up with the intriguing pseudonym. Cardi replied that it has to do with alcoholic drink’s manufacturer Bacardi.

In August, "Bodak Yellow" reached the second spot on Billboard Hot 100 and topped Hot R&B/Hip-Hop Songs. In September, it conquered Billboard Hot 100. Before Cardi B, this top spot belonged to just one female rapper, Lauryn Hill, with a single back in 1998. The song topped the charts for three weeks in a row and earned three platinum certificates. New York Times editor called the song “a rap anthem of summer 2017”. The Spanish version of "Bodak Yellow" came out shortly. Kodak Black created a remix. Considering Cardi B’s joint projects with "No Limit" and "MotorSport", she became the first female rapper, whose three songs reached the top-10 spots of Billboard Hot 100 and Hot R&B/Hip-Hop Songs. In December 2017, together with a Puerto Rican singer Ozuna, Cardi recorded new songs "La Modelo" and "Bartier Cardi". In January 2018, Cardi B became the first female singer whose five singles entered top-10 of Billboard Hot R&B/Hip-Hop simultaneously.