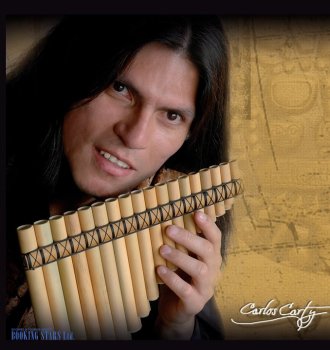 Carlos Carty was born in 1976 in Lima, Peru. Music was his hobby ever since he was a teenager. Carty was initially a big fan of Andean music, and he decided to learn how to play wind instruments. Carlos’ family and friends supported the young man, who was 100 % sure that he’ll become a professional musician. As of today, Carlos recorded ten albums. He works with such famous artists as Adriana Mezzadri (Peru), Roberto Leal (Portugal), and Toquinho (Brazil). From 1998 to 2006, Carty lived in Brazil.

The deep love Carlos had for the ancient music of indigenous people and their instruments hoped the musician create unique projects. It wasn’t easy to book Carlos Carty due to his busy schedule and specific approach to work. He was constantly researching something and looking for new-old melodies.

While living in Brazil, Carty came to know a big variety of percussions. He was invited to Globo TV, festivals, and school seminars, where he taught the kids to develop their talent and not forget their roots.

One of Carty’s teachers was Edgar Espinoza. This musician and producer dedicated his career to learn how to play ethnic wind instruments from all over the world, including Andean and Native American flutes.

In 1991, Carlos formed his first band and called it Cordillera. The band performed at different festivals, events, and private parties. The band stayed together for 6 years.

In 1998, Carty moved to Brazil. His work received a wide recognition in the country. He also learned how to play new instruments.

In 2006, Carty recorded an album Machupicchu o Segredo dos Incas, in which he showed his respect for the country, where he found important knowledge and discovered a completely new world of music. The melodies from that album as well as other Carty’s songs are often used on the Brazilian TV Globo for putting together documentaries.

In 2007, Carty travelled all over Peru, giving concerts. He performed at the famous Peruvian club Jazz Zone and at the cultural center, CAFAE-SE. Carlos got an opportunity to work with such artists as Roberto Leal and Adrian Mezzadri.

Carlos Carty continues researching and recording ethnic music of different people. He masters new instruments and performs live. Carty is mostly popular in Peru and Brazil, however, many artists and music lovers from other counties know Carty as a talented musician.