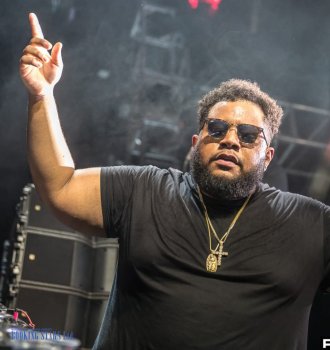 "Making music is about having an impact," exclaims DJ Carnage.

It's easy to feel the impact on every track the Los Angeles-based artist produces or remixes. With a versatile mindset and deft approach, he siphons electro, hip hop, pop, and trap into an intoxicating brew unlike anything out there. It's dirty, defiant, and diverse.

Carnage embraced music at a very young age. Before moving to the suburbs of Maryland, he grew up in Nicaragua and Guatemala. It gave him an international consciousness and perspective at a young age that would pervade his art. In order to get through long car rides with his mom, he'd make mix CDs of everything from Kanye West to Michael Jackson, and they'd listen to them together. It was with mom's encouragement that he began actually building his own tracks.

He recalls, "It's funny because one day my mom was like, 'Why don't you make your own beats?' I'd never thought of it before, so she bought me Fruity Loops. From there, I just got hooked."

He carved out a sizable local following in Maryland, slinging independent mixtapes and solidifying an online presence. Niles from The Cataracs actually stumbled upon his MySpace page and immediately became a fan. Their correspondence turned into a creative partnership and led to Carnage's signing with Indie Pop.

One of his first projects under that banner was a tripped-out and captivating remix of Yuna's "Live Your Life". Soon, Tiesto began spinning the cut on his popular Club Life podcast, while Paul Oakenfold inserted it into regular rotation on his radio show, Planet Perfecto. Carnage began turning heads. His "Festival Trap" remix of Hardwell's "Spaceman" soon exceeded 100k plays on Soundcloud, and he teamed up with Theophilus London and ASAP Rocky for the 2012 single, "Big Spender", and he co-produced The Cataracs "All You", featuring Waka Flocka Flame and Kaskade.

Everything simply laid the groundwork for the release of his proper debut, "Bang", on Fool's Gold though. It's an incendiary instrumental with a big hip hop bounce and a dubstep drop at just the right moment. "It's really massive," he enthuses. "It's a rap record with a huge drop. You never hear that kind of climax in hip hop or trap records. It's the perfect introduction to who I am because it touches on so many genres."

The single's B-side is a grimy and guttural gem that sees him collaborate with 15-year-old Chicago underground rap sensation, Katie Got Bandz. It's bound to get the internet going crazy.

There's nothing quite like seeing Carnage live though. Every show explodes based off his hyperkinetic energy and formidable presence. He's rocked stages at Nocturnal Wonderland, Electric Daisy Carnival, Coachella, and more as well as performing alongside Borgore, A-Trak, The Cataracs, and countless others.

"I'm a big black guy who loves to rage," he chuckles. "I'm not what you expect. I feed off the crowd and go for it."

That's why Carnage's impact will be felt for a long time to come.