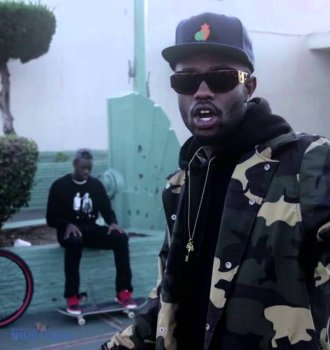 Casey Veggies’ real name is Casey Jones. He was born on 18 July 1993 in Los Angeles. Not much is known about the artist’s youth except that he loved music since childhood. When Casey was 14, he formed a band called Odd Future. The group released a mixtape, Customized Greatly Vol. 1. However, the album didn’t become successful. Even though Jones can’t pinpoint the exact time when he decided to start a solo career, it’s likely that the failure of the debut mixtape was the starting point.

It’s not fair to say that the rapper’s first album was recorded in vain. Thanks to the priceless experience, the rapper learned how to create lyrics and demonstrate songs to the public. In his teenage years, he already met many famous hip-hop artists, especially those, who worked with successful labels, such as Def Jam.

Together with YG, Veggies recorded his second mixtape. The critics approved of the artist’s work and noted that his lyrics became deeper and more oriented at the young audience.

After finishing high school, Casey was invited to perform with Mac Miller as an opening act for his Blue Slide Park Tour. The invitations to tours showed that Veggies was becoming more and more popular. He was making big steps toward success. Soon, he got a chance to work with popular artists, such as Nipsey Hussle, Dom Kennedy, and Kendrick Lamar. In the early 2010’s, he worked with Rich Hil, King Chip, and Raheem DeVaughn. A little later, Veggies collaborated with The Neighbourhood to record the mixtape, Jealou$y.

Casey took a break from creating his own songs because he had many offers to work with other artists. Such colloborations helped him gain priceless performance and teamwork experience, which he later used to his benefit.

Finally, in January 2013, the artist recorded a solo mixtape, which he called Life Changes. It was his first work to catch the attention of the recording labels, such as VIC and Epic Records. The contracts were signed shortly.

The same year, Veggies was invited to the opening of PNCINTL store, at which he performed the song "Young Niggas", recorded with Juicy J. Three months later, he presented another single “Money Don’t Buy Time”. After that, Casey worked with Vince Staples on Earl Sweatshirt’s song “Hive”.

In December 2013, the singer presented another mixtape, Fresh Veggies, recorded with Rocky Fresh. The album came out with the assistance of Maybach Music Group. Its guests were Overdoz, Ty Dolla $ign, Juicy J, Kirko Bangz, and Hit-Boy.

In May 2015, the singer went on his first tour of Canada supported by PNCINTL. Four months later, Veggies released his debut LP, Live & Grow. The album reached the 15th position of Top R&B/Hip-Hop Albums and climbed to the 93rd spot of US Billboard 200. It was a big success for the singer, whose mixtapes were only popular on the local level. The following songs featured in the LP became hits, "I'm the King", "New Face$", "Actin' Up", and "Set It Off". Singles Backflip" and "Tied Up" came out as promos in November 2014 and April 2015 accordingly. The album’s guests were Dom Kennedy, Ty Dolla Sign, BJ the Chicago Kid, YG, Iamsu!, and DeJ Loaf. After the release, many clubs tried to book Casey Veggies for private events. He often took up their offers.

In 2017, the rapper worked with Wiz Khalifa. Their singles were featured in the mixtape, Laugh Now, Fly Later.

The rapper has a big potential. He continues recording new songs and performing live.