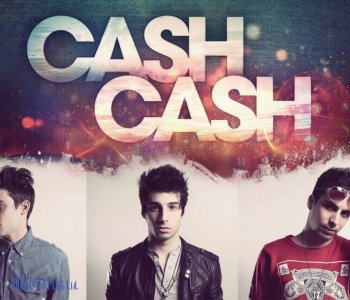 Cash Cash was formed in New Jersey in 2008. Its founders are brothers, Jean Paul Makhlouf and Alexander Luke Makhlouf, and their friend Samuel Warren Frisch. Artists decided to focus on electronic music, mixing songs by other artists and recording original tracks.

Initially, musicians called the group The Consequences. However, it turned out that another band had ownership rights to the name. So they came up with Cash Cash. After signing a contract with Universal Republic Records, DJs recorded their debut EP, Cash Cash, which reached the 24th spot of Billboard Heatseekers. It was an excellent start for the team.

In 2008, the band went on its first tour. It worked with such artists as Tyga, Boys Like Girls, Forever The Sickest Kids, and The White Tie Affair. At the end of the year, Cash Cash presented their debut LP, Take It to the Floor. It was recorded with the assistance of Universal Republic Records and sold on iTunes. In January 2009, the album reached the 31st spot of the Heatseekers chart. In April, the artists toured the USA with Hyper Crush. The tour was called Let It Rock. After that, they performed at The Bamboozle festival and embarked on a tour of the UK. The band worked as part of the Vans Warped Tour with Cobra Starship. Later, the artists toured with Breathe Carolina and Family Force 5.

At the end of 2009 and beginning of 2010, the band recorded several singles and a cover for Cascada’s song "Everytime We Touch". Musicians spent the majority of their time touring, They appeared in Seattle on Kiss FM’s Jingle Bell Bash. In February 2010, Cash Cash finally embarked on their own tour, The Robots in Hightops Tour.

In March, the artists recorded a cover for Alphaville’s “Forever Young”. In November, they presented "Red Cup (I Fly Solo)" with Lacey Schwimmer and Spose. In April 2011, the group released its second album, Love or Lust, which was recorded with the assistance of the Japanese label, Twilight Records.

The next big LP came out in 2012. The artists called it The Beat Goes On. The album had 11 tracks and came out in Japan. For other countries, musicians released a 6-track disc. Both of them featured singles "I Like It Loud" and "Michael Jackson", which became hits. After the release, musicians embarked on a tour of Japan and went to support the LP in Brazil. At that time, many fans wanted to book Cash Cash for private events.

Later that year, the artists embarked on another Japanese tour. In December, they created a remix to Krewella’s “Alive”, which became part of the album, Play Harder Remix. Throughout the year, the group recorded several original and remixed tracks, which reached high spots on Hype Machine’s chart.

The group was becoming more and more popular. It started working with famous artists. In 2013, Cash Cash recorded a remix to "Symphonica" with Nicky Romero. It was released on Beatport by Protocol Recordings. In October, the group appeared on ADE festival in Amsterdam to perform with such artists as Dimitri Vegas & Like Mike, Martin Garrix, John Dahlback, and many others.

After signing a contract with Atlantic Records in 2013, Cash Cash presented two EPs. Overtime featured six songs, among which were such hits as "Take Me Home" and "Hideaway", recorded with Ella Eyre and “Here and Now”, created with an Estonian singer Kerli.

In March 2014, the band presented the next EP, Lightning. It featured a new single “Lightning” and several remixes for tracks from the previous album. In 2016, musicians recorded a hit single “Aftershock”, the music video for which collected several million views on YouTube. Later the song became a part of the next album, Blood, Sweat & 3 Years, which came out in June. The LP reached the 3rd spot of Dance/Electronic Albums Chart and came in 5th on the Top Heatseekers Chart.

In 2018, the group presented new singles, "Jewel", recorded with Nikki Vianna, "Finest Hour" with Abir, and "Call You" with Nasri.

In 2019, Pink invited Cash Cash to help her record a new single “Can We Pretend”, which became a hit.