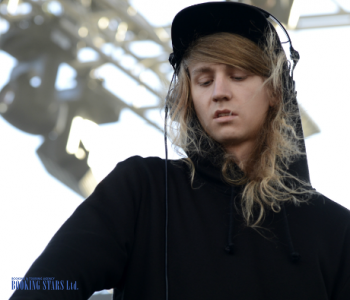 Cashmere Cat is the pseudonym of a famous Norwegian DJ, producer, and artist, Magnus August Høiberg. He was born on 29 November 1987 in Halden, Norway. Hoiberg has written numerous songs for celebrities and released several solo albums.

Before becoming Cashmere Cat, between 2006 and 2008, Magnus represented his country at the DMC World DJ Championship. The best DJs of the world compete in this contest. Back then, Hoiberg used a pseudonym, DJ Final.

In 2012, Magnus released his debut EP and called it Mirror Maru. At that time, he adopted the new pseudonym.

The artist was a big fan of many music genres. He was inspired by such talented musicians as Rustie, Hudson Mohawke, and Gilles Peterson. The leading single from the first EP was later used as a soundtrack in the popular video game Grand Theft Auto V, which came out in 2013.

Cashmere Cat’s popularity began to rise when he helped 2 Chainz record his hit “No Lie”. The single topped 25 Awesome Genre-Benders 2012 list according to VIBE magazine. At the beginning of 2013, the American musician Benny Blanco invited Cashmere Cat to Los Angeles to work as a producer at his concerts. After that, the DJ moved to the United States and settled in Manhattan.

About a year later, in February 2015, the artist presented a new EP, Wedding Bells. In August, the talented producer worked with Ariana Grande on her single “Be My Baby”, which became a part of her LP, My Everything. Magnus also collaborated with Ariana during her The Honeymoon Tour. He performed as an opening act and sang a new song “Adore”. After that, many fans started trying to book Cashmere Cat for private events.

At the beginning of 2016, the artist confirmed that his debut LP, Wild Love, was due out the same year. But it was never released. In July, together with Sinjin Hawke, Cashmere Cat worked as a producer on Kanye West’s “Wolves”, which later became part of his album, The Life of Pablo.

In March 2017, on SoundCloud, the fans got access to the DJ’s new single called "9 (After Coachella)". A month later, on Twitter, the artist announced that the debut album would be called 9 rather than Wild Love, as was expected. Cashmere confirmed that the album was almost ready.

The long-awaited debut LP finally came out in April 2017 with the assistance of Interscope Records and Mad Love Records. The invited artists were Francis and the Lights, The Weeknd, Selena Gomez, Tory Lanez, Camila Cabello, Sophie, and MØ.

In 2018, Cashmere Cat helped produce tracks for Nas and Kanye West. He also worked on Benny Blanco’s “Eastside”, which topped the British charts. Next year, the artist became a co-author and a producer of Shawn Mendes’ and Camila Cabello’s “Senorita”.

In September 2019, the DJ presented a new LP, Princess Catgirl. The leading single “Emotions” became a hit. The music video for the song collected over 1.2 million views on YouTube in just two months. The album also featured such popular songs as "For Your Eyes Only", "Back for You", and "Watergirl".