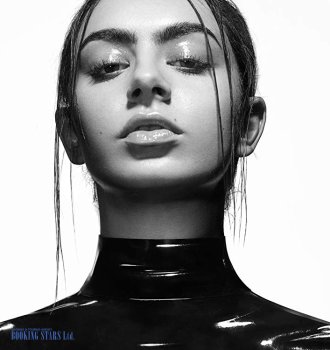 Charli XCX is a British singer and songwriter, who created several pop hits. She constantly widens the borders of experimental pop music. After earning popularity unloading songs on MySpace, she came up with a romantic LP, True Romance, followed by the bold Sucker, and the creation of an experimental label, Vroom Vroom. Charli recorded several mixtapes and many popular singles. She doesn’t stop surprising her fans and critics with new songs.

Charli XCX’s real name is Charlotte Aitchison. She was born in Cambridge on 2 August 1992. Her father is a Scottish businessman. Her mom is an ex-nurse, who was born in Uganda. Charlotte grew up in Start Hill and went to high school in the nearby town. Even though her parents were far from the music business, Aitchison started showing interest in singing rather early. She was a big fan of Britney Spears and Spice Girls. At 14, Charli started writing lyrics.

The young woman convinced her parents to take a loan to help her record a demo album, 14. At the beginning of 2008, she started uploading her songs to MySpace. The singer attracted the attention of big music industry players. At about the same time, she took the pseudonym Charli XCX. It was her nickname in MSN Messenger.

Charli’s parents supported the young singer and attended her performances. At 18, she moved to London to enroll at University College London. Soon, she released two singles "Nuclear Seasons" and "Stay Away".

In 2011, Charli presented several remixes and was invited by Alex Metric to help record "End of the World". Later, she worked with Starkey on "Lost in Space".

The next year, Charli XCX recorded two mixtapes, "Super Ultra" and "Heartbreaks and Earthquakes". At about the same time, the singer gave her song “I Love It” to the Swiss duo Icona Pop. The artists started giving concerts. She performed as an opening act for Santigold and Coldplay.

In 2013, Charlotte released a single “You (Ha Ha Ha)" and presented a music video for the song. In April, she released the official debut LP, True Romance. It reached the 85th spot on the UK Albums Chart. Many fans wanted to book Charli XCX for private events.

In one of the summer 2013 interviews to the music website Popjustice, Charli announced the completion of a new album, Sucker. The release was planned for October, together with the single, "Break the Rules". However, in the USA, it was delayed until December 2014. In Europe, the album came out in February 2015.

The LP debuted on the 28th spot on Billboard 200, becoming the singer’s first LP to enter the American charts. It also reached the 15th position on the UK Albums Chart. The third single, "Doing It", recorded with Rita Ora, came out in February and climbed to the 8th spot of the British chart.

In 2015, together with Giorgio Moroder, who is considered a pioneer in the electronic music world, Charlie recorded a single "Diamonds". It was featured in Moroder’s LP, Déjà vu. The same year, the singer directed a documentary about gender equality issues called The F Word and Me.

At the beginning of 2016, Charli announced the creation of an experimental label, Vroom Vroom Recordings and the release of an EP, Vroom Vroom. The lead single “Trophy” was presented the same day and played on Beats 1 radio.

In the spring of 2017, the artist presented a mixtape, Number 1 Angel, which featured the guest appearances of such singers as Raye, Uffie, Cupcakke, and Abra.

In 2018, Charli worked with Taylor Swift during her tour. The same year she released new singles, "No Angel", "Focus", and "Girls Night Out".